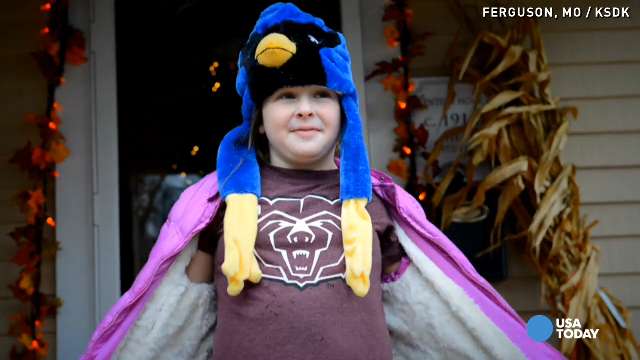 This Thanksgiving, Ferguson residents say they are still looking at the good side of things and feeling "thankful" despite the violence and negativity. VPC


FERGUSON, Mo. — After days of turmoil, Ferguson found a semblance of normalcy on Thanksgiving Day, a reprieve after days of violence and protests that unsettled this town.
Hundreds of protesters had gathered late Wednesday for a third straight night outside the Ferguson Police Department following the announcement that a grand jury would not indict police officer Darren Wilson for the shooting death of Michael Brown. But on Thursday, Florissant Road, the main street in Ferguson's downtown, was mostly empty except for a handful of city residents and other volunteers who painted on the drab plywood boards that now cover many of the businesses here.
"It was important to me to get the kids out just to do something positive," said Becky Kern-Ryan, 38, who watched as her 10-year-old-son and a neighbor's child painted a boarded-up Chinese restaurant. "We couldn't sit at home and just wait for other people to fix things."
People from Indiana and Ohio decided to forgo their own Thanksgiving plans with family and friends to travel here to see how they could help.
Among them was Alex Sheen of Cleveland, who painted plywood boards around the corner from Kern-Ryan and her son.
"I found myself complaining and angry about the looting," Sheen said. He drove eight hours overnight to get here from Cleveland early Thursday. "Complaining doesn't get much done."
Meanwhile, worshipers from the predominantly white congregation at St. Stephen's and the Vine Church joined worshipers at the predominantly African-American congregation of Wellspring Church for an ecumenical service and a Thanksgiving lunch.
"After 100-some days of protest, it's good to connect with family and in-laws and just do something different," said Rev. Willis Johnson, senior pastor of Wellspring Church.
Many of the activists that have taken to the streets over the last three months retreated to St. Luke AME Church in St. Louis for a Thanksgiving meal.
Cat Daniels, who is affectionately known as Mama Cat and has been cooking for protestors for the last three months, cooked up enough turkey, roast beef , giblet dressing to feed 250.
Daniels said it's been a difficult few days for her and her adopted family, but they would rebound.
"We're bruised but not broken," she said. "We understand that this is just the beginning."
USA TODAY
Some fear rioting may seal Ferguson fate for decades

Protests on Wednesday were much calmer after two days of demonstrations in which dozens of people were arrested and this town of 20,000 was ravaged by looting and at least a dozen businesses were set ablaze.
On Monday night, 61 people were arrested in Ferguson and 21 in St. Louis following the grand jury announcement. On the second night of demonstrations Tuesday, protesters smashed out windows at Ferguson City Hall and set a police car on fire after smashing its windows and flipping it on its side. A total of 58 arrests were made in Ferguson and St. Louis on the second night.
By contrast, only two people were arrested Wednesday evening in Ferguson in addition to three who were detained at a demonstration in nearby St. Louis earlier in the day, police said.
Authorities in Missouri were hopeful that Wednesday's largely peaceful demonstrations would mark a turning point in the crisis here. Gov. Jay Nixon visited the Ferguson command center on Thursday to thank police and National Guard troops who were dispatched to secure the area. He ate Thanksgiving dinner with them.
"I appreciate the sacrifice that these law enforcement officers and citizen-soldiers are making, especially during this holiday weekend, in order to protect lives and property," Nixon said.
On the downtown street where Brown was killed, light traffic passed a trio of children beneath a lighted "Season's Greetings" garland who took brushes to the plywood that covered many of the storefront windows to foil potential vandals. One of the artworks quoted Dr. Seuss' The Lorax: "Unless someone like you cares a whole awful lot, nothing is going to get better, it's not."
"We thought we'd do what we could to make it a little more attractive and then try to bring the kids into it and get them involved in making the businesses appear a little less scary, depressing," said Leah Bailey, whose 7-year-old son, Dennis, climbed a ladder to finish an orange dragon.
Since late Monday, protests have spread to dozens of U.S. cities. Protesters have blocked major highways and urban thoroughfares, On Wednesday night dozens of protesters in Akron, Ohio, blocked an intersection near Interstate 77, chanting, waving flags and carrying signs that said "Stop killing the innocent."
Most of the protests nationwide have been peaceful, but police in Oakland detained 35 people late Wednesday following a third night of protests that included a march that deteriorated into unrest and vandalism, officials said.
About 100 people marched through Oakland streets, police spokeswoman Johnna Watson said. A few protesters broke windows, including several at the downtown Oakland Tribune newspaper building. Nearby, an estimated 200 people spun their cars in circles at the Port of Oakland. Gunshots were heard at the scene, but no injuries were reported, police said.
In all, police in Oakland have arrested 167 people since the protests began. They said there could be more arrests after police reviewed video and pictures of the unrest.
Police in Los Angeles late Wednesday arrested at least 130 demonstrators who refused to disperse during a protest, but officials on Thursday said protesters who couldn't make bail would be released in time for Thanksgiving dinner.
About 90 people were still jailed around midday and would be released on their own recognizance without having to post $500 bail.
Because of the holiday, many of those arrested would have otherwise remained jailed until Monday, when courts reopen. A police commander said 338 people had been arrested in the past three days for failure to disperse and disrupting the peace.
In New York City on Thursday, police handcuffed seven protesters chanting "Justice for Mike Brown!" after the group tried to march toward the route of the nationally televised Macy's Thanksgiving Day Parade. About 50 protesters walked down the sidewalk carrying signs and chanting, "Hands up, don't shoot."
In St. Louis, protesters gathered near Busch Stadium for what organizer Paul Byrd called a "pro-community" rally meant to counter the recent Ferguson violence that he suggested has tarnished the region's image. Byrd, a 45-year-old construction worker from Imperial, Mo., declined to say whether he supported Wilson but noted, "I totally support police officers."
In a case related to the Ferguson shooting, sources have told KSDK-TV that two men arrested last week on federal weapons charges were planning to bomb the the city's iconic Gateway Arch. The men, identified in an indictment as Brandon Baldwin and Olajuwon Davis, also planned to kill St. Louis County Prosecuting Attorney Bob McCulloch, who presented the case to the grand jury, and Ferguson Police Chief Tom Jackson, the sources said. Jackson said he "was warned about a plot" by federal agents but was "not given a lot of detail."
Baldwin and Davis were arrested Nov. 20, four days before the grand jury announcement. Sources said that Baldwin and Davis had been under investigation for months and were aggressively pursuing explosive devices.
In Ferguson, a handful of people on Thursday gathered at Greater St. Mark Family Church, which sits blocks from where a number of stores went up in flames late Monday. They listened as the Rev. Tommie Pierson said Monday night's destruction and chaos were perpetrated by "a small group of out-of-control people out there."
"They don't represent the community, they don't represent the mood nor the feelings of the community," Pierson said. "I would imagine if you talked to them, they probably don't even live here. So, we don't want to be defined by what they did."
Contributing: Associated Press