5 things you need to know Thursday


[h=2]Individual all-around highlights Day 5 in Rio[/h]Twenty-four women will compete Thursday afternoon in the Rio Olympics for the most sought-after title in gymnastics: the individual all-around. Simone Biles of the United States is the heavy favorite to win gold, but look for teammate Aly Raisman to also vie for a medal. Meanwhile, in the pool on Thursday, Michael Phelps and Ryan Lochte will compete in the 200-meter individual medley final. Also on Thursday, 60 golfers — among them Ricky Fowler, Sergio Garcia and Henrik Stenson — hit the Rio Olympic golf course for the first round of the first Olympic golf event since 1904. Here’s a schedule of all the day’s action.
xEmbed

USA TODAY Sports' Martin Rogers tells you the five things to watch for during Day 6 of the Olympics.

During a rally in St. Petersburg, Florida, Hillary Clinton said Monday that the economic plans Donald Trump outlined in Detroit would benefit the rich and do little to create jobs or boost the economy. (Aug. 8) AP

[h=2]The Perseids meteor 'outburst' expected tonight[/h]What's often the best meteor shower of the year — the Perseids — is predicted to be even better than usual when the shooting stars appear in the Thursday night sky. Forecasters are predicting a Perseid outburst this year with double the normal rates. An outburst, which is a meteor shower with more meteors than usual, occurs when Earth passes through the heart of the tail of the comet Swift-Tuttle as it orbits around the sun. The best viewing conditions are in rural areas away from the glow of streetlights. No special equipment is needed, just a dark sky and some patience.
xEmbed

The Perseid meteor shower is one you won't want to miss, with a peak-rate of 200 meteors per hour expected to fly across the night sky.

[h=2]Let the (meaningless) games begin:<span style="color: Red;">*</span>NFL preseason kicks off[/h]NFL preseason action gets underway Thursday with a slate of<span style="color: Red;">*</span>six games starting at 7 p.m. ET. Teams in action include the defending champion Broncos, who won't have Super Bowl MVP Von Miller in the lineup as they take on the Bears. (Miller says he's not mentally ready to play after some intense contract negotiations). Patriots fans will be curious to see how much playing time coach Bill Belichick gives quarterback Tom Brady as they take on the Saints;<span style="color: Red;">*</span>Brady must sit out the first four games of the season for his Deflategate suspension. Check out USA TODAY's preseason NFL Power Rankings, as well as For the Win's ranking of NFL starting quarterbacks.
[h=4]Posted![/h]A link has been posted to your Facebook feed.


[h=2]CVS Health to announce new mobile-pay app[/h]CVS Health, the nation’s largest drug-store chain, plans to announce Thursday that it will start its own mobile-payment app, CVS Pay. This move adds CVS to the growing list of major national retailers that are increasingly introducing their own app-based alternatives to the tech companies’ mobile-payment options. Believing they will reap greater benefits from controlling the user’s payment experience,<span style="color: Red;">*</span>CVS Pay will combine the company’s loyalty program, prescription pickup and payment options into one app, allowing customers to leave their wallets at home when they walk into one of the retailer’s 9,600 locations. 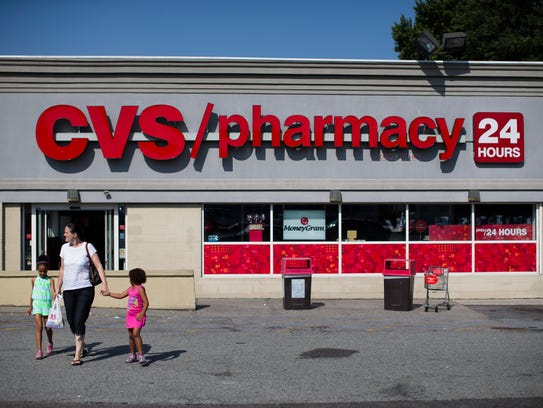