The Louisiana National Guard was deployed to Youngsville and other sites around the state. Kris Wartelle/The Advertiser


LAFAYETTE, La.<span style="color: Red;">*</span>— Across Louisiana, at least three people have died and thousands of people have been rescued from flooding.
Louisiana Gov. John Bel Edwards said in a press conference Saturday<span style="color: Red;">*</span>residents advised to evacuate should do so, because officials don't know how bad flooding will get.
Flooding is expected to continue through the weekend in southern Louisiana, and the National Weather Service has extended its flash-flood warning for seven parishes to 1:45 p.m. CT Saturday.
A man in Zachary died after slipping<span style="color: Red;">*</span>into a flooded ditch and another man died trapped in a submerged pickup in St. Helena Parish.
The body of a woman from Amite was recovered Saturday from the Tickfaw River, according to Michael Martin, chief of operations for the St. Helena Sheriff’s Office.
Earlier in the day, Edwards said more than 1,000 people had been rescued. That number appeared to at least double by the end of the day, when Livingston Parish Sheriff Jason Ard said 2,000 people in his parish alone had been rescued, and more people still await help.
“We haven’t been rescuing people. We’ve been rescuing subdivisions,” he said. “It has not stopped at all today.”
Parts of Lafayette Parish are forecast to receive an additional 5 to 10 inches of rainfall between midnight Friday and Saturday afternoon, according to a release from Lafayette Consolidated Government. Major flooding that won't subside until Wednesday evening is in the forecast.
"I've seen flooded roads I've never seen before," said spokesman Brooks David of the Louisiana State Police. In Scott, La., about 6 miles west of Lafayette, the mayor closed all city streets and said anyone driving could be cited; the Lafayette Parish Sheriff's Office said it responded to more than 270 calls for rescue in the past day.
Flood stage for the Vermillion River is 10 feet, the level recorded Saturday morning was 16.4 feet, and it is expected to rise to 18.4 feet, a 100-year flood level. Its highest recorded crest was 24.87 feet in 1940.
USA TODAY
Louisiana residents seek safety from flooding, more rain expected


FLOODING AFFECTS THOUSANDS IN SOUTH LOUISIANAWATCH: Youngsville resident: Water is up to our chests | 0:21Highland Ridge resident talks about how the neighborhood is dealing with flood waters. Kris Wartelle/The Advertiser


FLOODING AFFECTS THOUSANDS IN SOUTH LOUISIANAWATCH: National Guard responds to flooding in Youngsville | 0:57The Louisiana National Guard was deployed to Youngsville and other sites around the state. Kris Wartelle/The Advertiser


Louisiana Gov. John Bel Edwards declared a state of emergency Friday and even the governor's mansion in Baton Rouge has a flooded basement that caused the governor's family to find accommodations elsewhere until the problem is fixed.
In a 24-hour period, Baton Rouge reported as much as 11.34 inches of rain fell compared with 2.34 inches at New Orleans’ international airport in Kenner. Meteorologist Mike Shields in the weather service's Slidell<span style="color: Red;">*</span>office said one of their weather observers reported 17.09 inches in Livingston.
The Comite River near Baton Rouge and Amite River near Denham Springs, both in Louisiana, were predicted to set record crests over the weekend. Forecaster Alek Krautmann said both rivers could flood many houses in suburban areas near Baton Rouge. 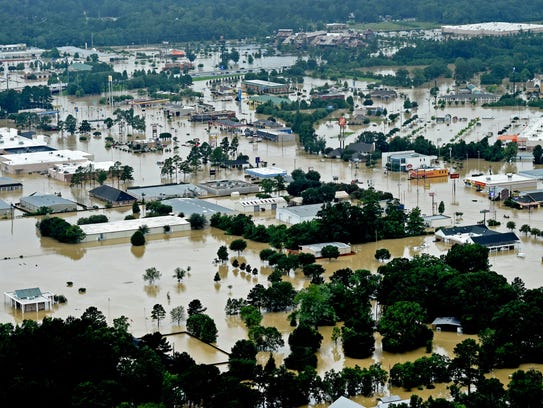 
The Tickfaw River, just south of the Mississippi state line in Liverpool, La., was already at the highest level ever recorded, and that was at 9 a.m. Friday.
Mississippi Gov. Phil Bryant declared a state of emergency for several counties in his state as it also battled the heavy rainfall.
In southwest Mississippi, rescues occurred in Amite and Wilkinson counties.
Leroy Hansford, his wife and stepson were among those rescued near Gloster, Miss.
USA TODAY
Arizona monsoon rain a '1-in-100' year storm, latest historic storm in USA


Hansford, 62, said waters from Beaver Creek, which is normally more than 400 feet away from his house, rose quickly overnight.
“We woke up and the water kept on coming,” Hansford said. “It came up to my waist.” His wife told Hansford that it’s the highest she’d seen the creek in the 48 years she has lived there.
In Crosby, Miss., more than 50 people flooded out of a neighborhood will be housed at a shelter in Natchez until<span style="color: Red;">*</span>at least Monday.
Contributing: Claire Taylor, Kris Wartelle and Seth Dickerson,<span style="color: Red;">*</span>The (Lafayette, La.) Daily Advertiser; The Associated Press. Follow The (Lafayette, La.) Daily Advertiser on Twitter:<span style="color: Red;">*</span>@theadvertiser
[h=4]Posted![/h]A link has been posted to your Facebook feed.