79 [h=6]Share This Story![/h]Let friends in your social network know what you are reading about

[h=4]Cleveland mayor: Protests mostly peaceful after officer's acquittal[/h]Streets in Cleveland were largely calm Sunday morning after a number of people were arrested in protests after a police officer was acquitted Saturday in the shooting deaths of two unarmed black suspects following a high-speed car chase. 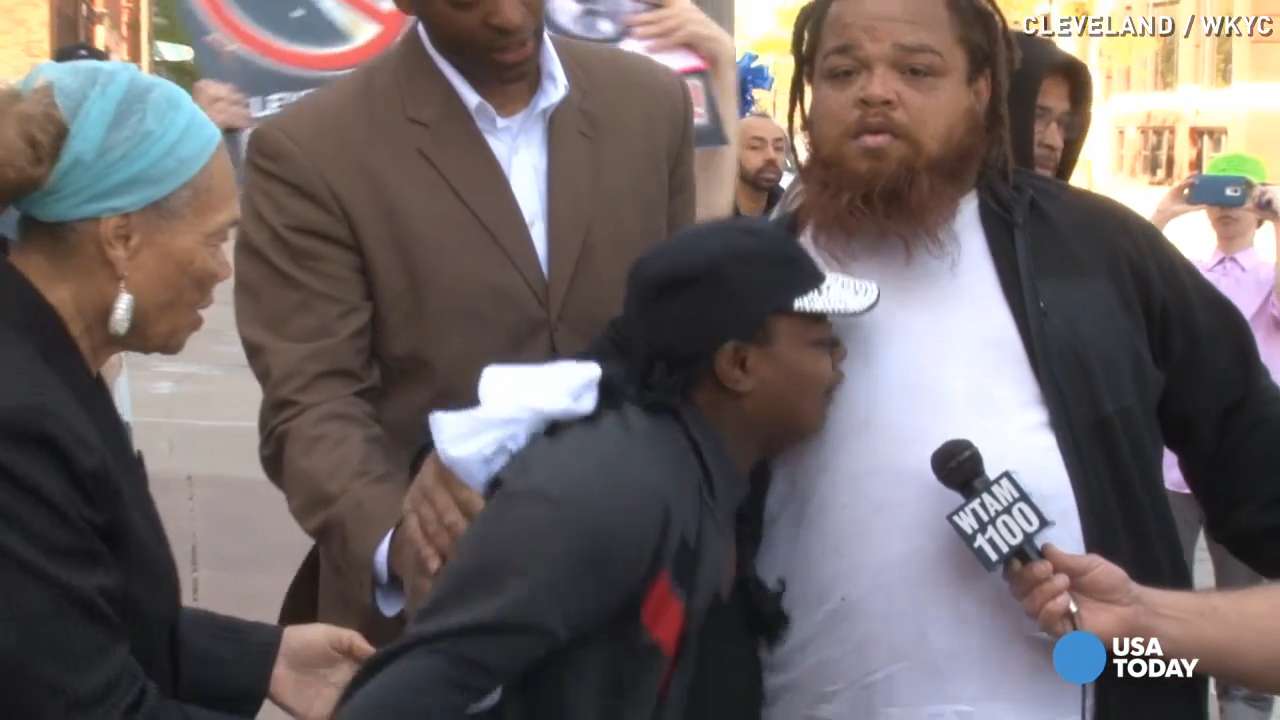 
Family members of Timothy Russell and Malissa Williams spoke out after police officer Michael Brelo was found not guilty of voluntary manslaughter. Brelo shot and killed the pair after a high speed chase. VPC


People take to the streets and protest in reaction to Cleveland police officer Michael Brelo being acquitted of manslaughter charges after he shot two people at the end of a 2012 car chase in which officers fired 137 shots May 23, 2015 in Cleveland, Ohio.(Photo: Ricky Rhodes, Getty Images)


Cleveland Mayor Frank Jackson on Sunday encouraged residents to come downtown and enjoy themselves over the holiday weekend — even as sometimes raucous protests followed the acquittal of a white police officer in the deaths of two unarmed black suspects.
"I would say, Come into downtown Cleveland," Jackson said. "Come into our neighborhoods and enjoy yourself. And if there are protesters, we will be there along with those protesters."
The Cleveland Cavaliers, locked in an NBA playoff battle against the Atlanta Hawks, face off tonight at Cleveland's Quicken Loans Arena.
Police Chief Calvin Williams said police on Saturday arrested 71 people following a not-guilty verdict in the case of Michael Brelo, a white officer who was facing two counts of voluntary manslaughter in the deaths of Timothy Russell, 43, and Malissa Williams, 30. Police killed the duo in a hail of bullets after a high-speed chase in November 2012.
Brelo, 31, still faces administrative charges while remaining suspended without pay, but he no longer faces the prospect of prison.
Cleveland is now awaiting a decision on criminal charges against a white officer in the fatal shooting of Tamir Rice, a black 12-year-old boy who was carrying a pellet gun.
USA TODAY
Cleveland cop acquitted of deaths in 137-shot barrage


Jackson said Saturday's protests were mostly peaceful. "They served as an example of peaceful demonstration and dialogue that will help us to move forward to a positive and substantive reform and forge better relationships between the police division and the community," he said.
Later in the day, however, "There were some who crossed the line," he said.
Those included a group of protesters who blocked State Highway 2, a major downtown thoroughfare, Williams said. "This is a dangerous activity and we try to discourage it and try to prevent it, because a highway with cars going 60 miles an hour is a lot different than a public roadway with a 25 mile-per-hour speed limit."
Williams said that protest eventually dispersed, but later Saturday evening, some protesters "began to get more aggressive and at times started to cross the line." A few of the demonstrations, he said, "degenerated into what we saw (as) just random acts of violence against people just standing on the street."
In one incident, he said, a protester picked up a sign at a restaurant and hit a patron in the head with it. Police arrested three people, including the protester and two others who tried to stop the arrest.
In another incident, he said, protesters pepper-sprayed restaurant patrons and were also arrested.
"We only moved in to make arrests when things got violent and protesters refused to disperse," Williams said. "We wanted to make sure that people understand we're going to help you in this process, but if things turn violent ... we will take action to preserve safety and in this city."
The NBA playoff game begins at 8:30 p.m. on Sunday.
Cleveland star LeBron James on Saturday urged city residents to remain calm and channel their energy into the Cavaliers' playoff run. "For the city of Cleveland, let's use our excitement or whatever passion that we have for our sport tomorrow, for the game tomorrow night, bring it tomorrow night ... our team we'll try to do our best to give it back to them," James said. The team leads the Hawks 2-0 in the Eastern Conference finals.
Williams said police would be at the arena, but not in riot gear unless it's needed. He said protesters can be arrested for criminal trespassing on private venues, including the arena. "There's a dividing line between a public right-of-way and a public sidewalk and the public streets and what you can do, versus being on private property and breaking the law," he said.
He asked future protesters to demonstrate peacefully, but said, "We won't tolerate people being violent at any time."
Saturday's protests began after Cuyahoga County Common Pleas Judge John O'Donnellfound that "Brelo's entire use of deadly force was a constitutionally reasonable response to an objectively reasonably perceived threat of great bodily harm from the occupants of the Malibu, Russell and Williams." 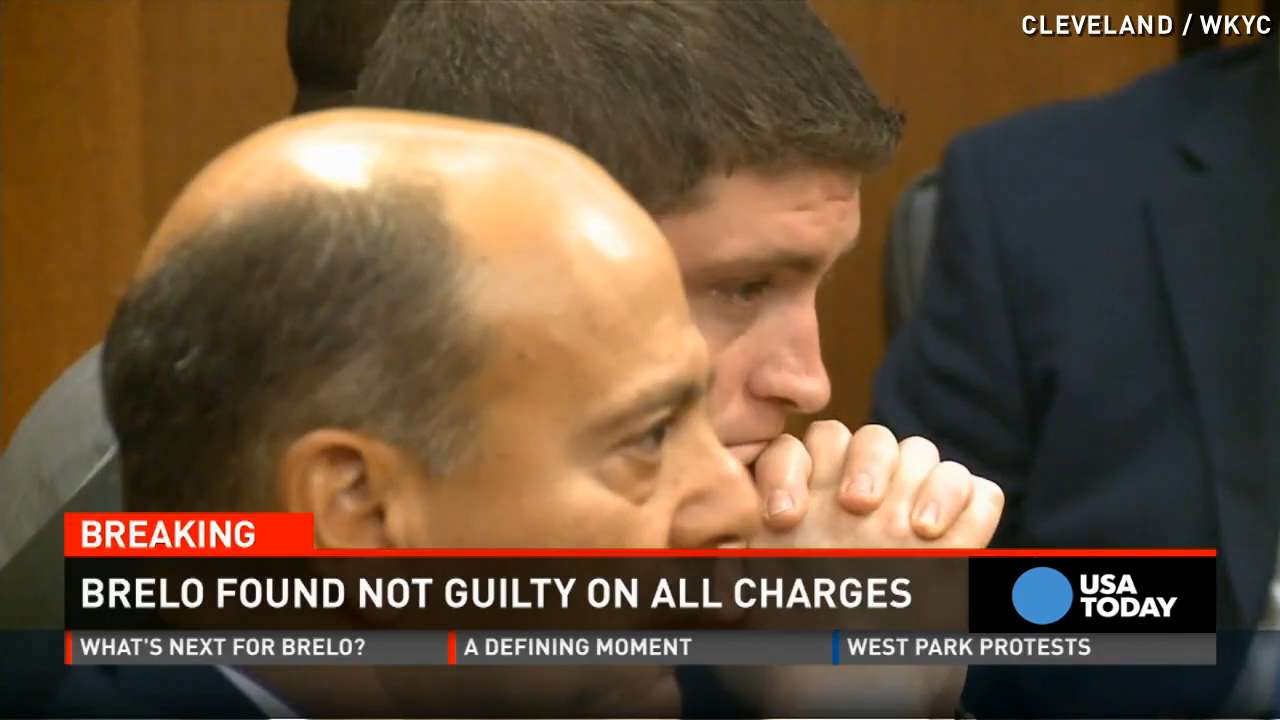 
Michael Brelo, a white Cleveland police officer on trial for voluntary manslaughter in the deaths of two unarmed black suspects, reacts as the judge renders a not guilty verdict. VPC

Before delivering his verdict, O'Donnell noted the recent unrest in Ferguson, Mo., and Baltimore over the deaths of black suspects by police officers, but said he would not "sacrifice" Brelo to an angry public if the evidence did not merit a conviction. "Guilty or not guilty, the verdict should be no cause for a civilized society to celebrate or riot," he said.
After the verdict, Russell's family issued a lengthy statement that said, in part, that the family was "deeply disappointed" in the ruling.
"Even as Judge O'Donnell acknowledged the disproportionate killing of people of color, he failed to hold Officer Michael Brelo accountable for his reckless and cruel actions," the family said. "Across this nation, we have witnessed countless acquittals and non-indictments where officers have walked free in the face of overwhelming evidence attesting to a disregard for human life, violations of police codes of conduct, racial profiling, excessive behavior and lethal force. Our hearts are heavy to see this all too familiar scene playing out once again."
USA TODAY
Protesters march through Cleveland, block Shoreway


During protests that followed the verdict, Alicia Kirkman, 47, said she joined the march in honor of her son, who was killed in a police shooting eight years ago.
"I'm just so mad we never get justice from any of the police killings," said Kirkman, who said she settled with the city after her son's death, but no charges were filed. 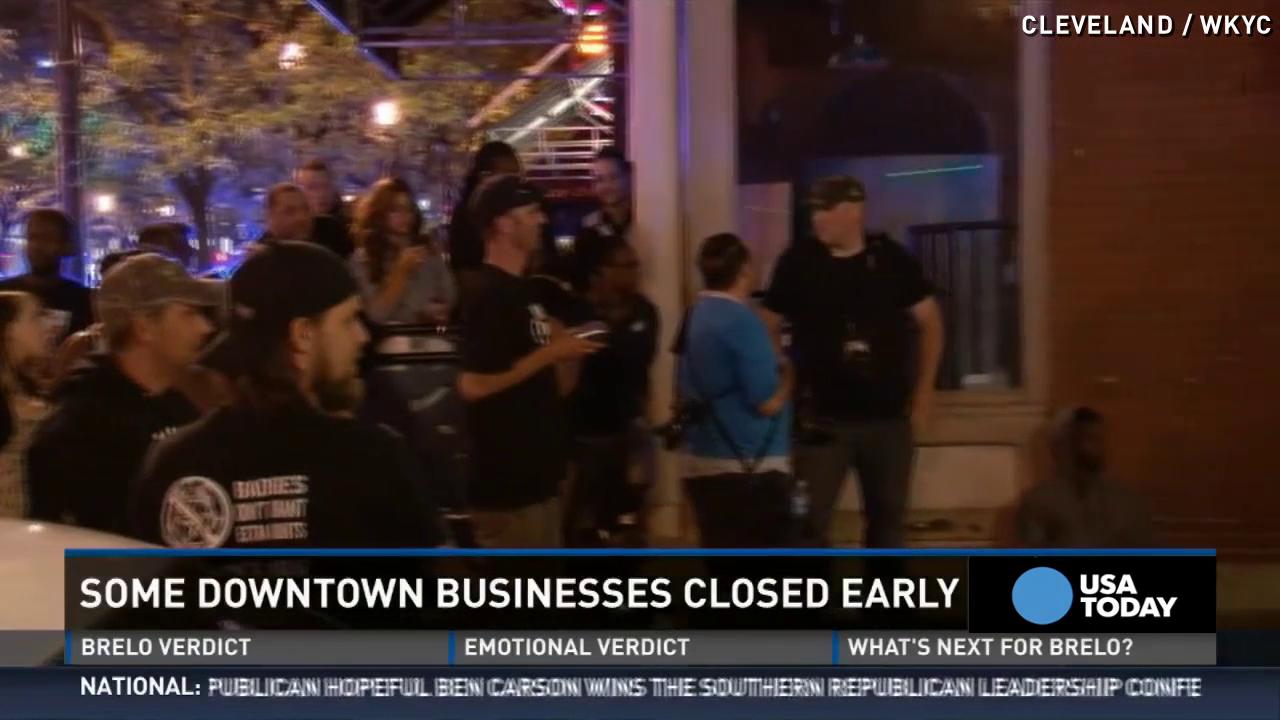 
Protesters took to the streets of Cleveland after a white police officer was found not guilty of voluntary manslaughter. Michael Brelo shot and killed two unarmed black suspects following a high speed chase that lasted more than 20 miles. VPC

The 2012 deaths of Russell and Williams followed a car chase, after Russell's beat-up Chevy Malibu backfired as it sped past police headquarters. The loud bang caused officers to think someone in the car had fired a gun.
Although 13 officers fired at the car after the chase, only Brelo faced criminal charges. Prosecutors said Brelo waited until the car had stopped and the pair were no longer a threat before he leaped onto the hood and fired 15 rounds down into the windshield.
Prosecutors argued Russell and Williams were alive until Brelo's final volley. Brelo's attorneys argued that other officers fired during the final round and that prosecutors could not prove in which order the fatal shots were fired. Russell and Williams were each shot more than 20 times.
USA TODAY
Tamir Rice's mom: 'Doesn't matter who's investigating'


Within hours of the verdict, the U.S. Department of Justice issued a statement saying that it will "review the testimony and evidence" present in the trial and consider possible legal options.
The first protest formed outside the Justice Center Saturday morning while Judge O'Donnell read from his verdict.
A larger protest of around 200 people gathered at noon near where Cuyahoga County Prosecutor Tim McGinty lives. Both protests later merged at a recreation center where the 12-year-old Rice was killed by a rookie patrol officer last November.
While that demonstration became boisterous, with Eugene Rice angrily calling for justice for his grandson, it remained peaceful. An investigation into the Tamir Rice shooting is nearly complete and will be given to the prosecutor's office to decide whether to pursue criminal charges.
On Sunday, Jackson noted that protesters "have a right to protest, to express whatever opinion they have — as long as they don't cross the line. If they cross the line, we will deal with them accordingly."
Contributing: WKYC-TV, Associated Press
0) { %> 0) { %>
0) { %>