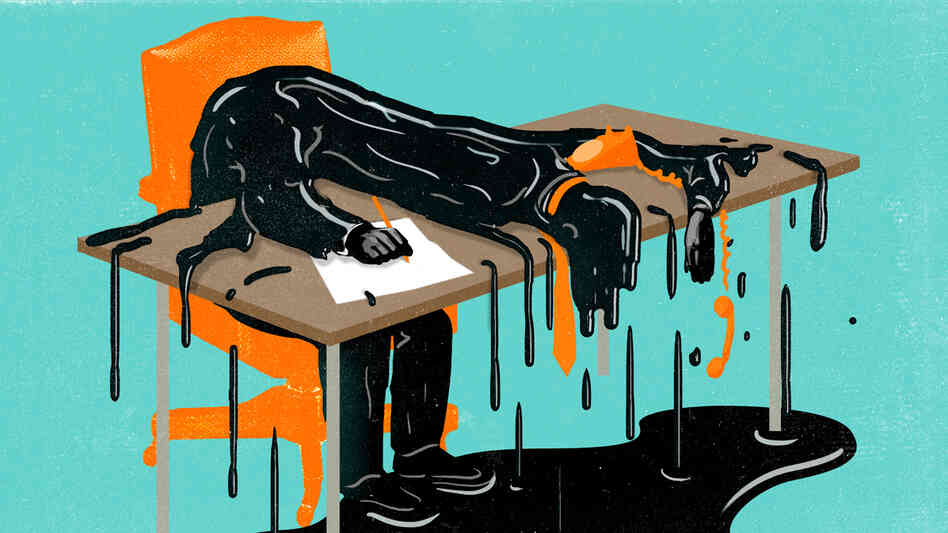 i i
hide captionThe Institute of Medicine is reviewing how chronic fatigue syndrome is diagnosed, and whether that label puts too much emphasis on fatigue over other significant symptoms.

If the prestigious Institute of Medicine pays attention to your disease, that's usually considered a good thing. But some patients with chronic fatigue syndrome fear that the review of the condition by the institute, an independent organization that advises the government on health issues, might perpetuate the widespread belief that their condition is purely psychological.
The controversy begins with the name. Everyone experiences fatigue, and lots of people are tired most of the time. But longstanding fatigue is just one of many debilitating symptoms.
"There are many people – scientists, clinicians, advocates – who believe the name 'chronic fatigue syndrome' does harm to patients," said Dr. Nancy Lee, a deputy assistant secretary in the Department of Health and Human Services. "I agree." Lee spoke at a meeting Monday in Washington, D.C., to launch the IOM review.
That harm includes trivializing the condition and a chilling effect on high-quality research, patients say. A far more serious-sounding name, myalgic encephalomyelitis, is used in other parts of the world and is increasingly being adopted in the United States. For the review, both the IOM and HHS are referring to the condition as "ME/CFS."
“ Over and over again, patients told us stories of delayed diagnosis, lack of treatment, a need to educate the doctor, increased disability and even hostility due to physician lack of knowledge and empathy.

The IOM panel is being asked to review evidence on the best way to diagnose the disorder. It will also consider whether the name should be changed.
Core to the diagnosis, patients and doctors who specialize in the disorder say, is a physical and mental "crash" of extreme exhaustion and ill-feeling after even mild exercise, requiring days to weeks of recovery. The official term is post-exertional malaise.
Sleep disturbance also affects nearly all patients, who typically wake up unrefreshed no matter how long they sleep. Muscle and joint pain and problems with thinking, concentration and memory are also nearly universal. Other common symptoms include gastrointestinal problems, dizziness, heat or cold intolerance, sore throat and swollen lymph nodes.
The syndrome often follows a viral illness, and many patients can pinpoint exactly when their symptoms began. No blood test has been developed to diagnose it, although researchers are working on that. Current treatments address the symptoms and not the underlying disease, believed to affect about 1 million children and adults in the U.S.
Several definitions have been published over the years. But because most focus primarily on the fatigue, people with other fatiguing conditions like depression have probably been included in studies. And that, advocates say, has yielded misleading conclusions about the disorder, particularly that exercise and psychological treatments are effective.

And if the IOM panel relies on those studies in redefining the disease, some patients say, it could lead the group give it a psychological diagnosis, which could perpetuate the stigma and limit the medical care they receive.
Patients already have a hard time getting care, according to Carol Head, CEO of the Chronic Fatigue and Immune Dysfunction Syndrome Association of America. She presented findings of a survey from 256 of her organization's members. Two-thirds reported that it took more than a year to get a diagnosis, and most saw more than four doctors before receiving the diagnosis.
"Over and over again, patients told us stories of delayed diagnosis, lack of treatment, a need to educate the doctor, increased disability and even hostility due to physician lack of knowledge and empathy," she said.
How the IOM defines ME/CFS will affect research, clinical trials, health policy and treatment, according to patient advocate Jennie Spotila. "The stakes are very, very high, and that's why the controversy is so high," she said.
Some patients and physicians say the United States should simply adopt a definition written by a Canadian panel in 2003, because it requires that a person have malaise after exertion, as well as other core symptoms.
That way, some patients suggest, the $1 million designated for the IOM review could be used instead to fund biomedical studies. The annual federal research budget for the condition is $4 million to $6 million.
But Head is hopeful that the IOM's effort will make a difference. "The credibility and authority of this IOM committee is important to making ME/CFS widely recognized and diagnosed," she said. "And that will help the 1 million Americans who struggle with this serious illness."