Fight over who merits a Boy Scout uniform an ongoing battle

55 1 [h=6]Share This Story![/h]Let friends in your social network know what you are reading about

[h=4]Fight over who merits a Boy Scout uniform an ongoing battle[/h]The vote by the Boy Scouts of America's board to lift its ban on gay scout leaders is the just the latest chapter in a long history of controversy over who merits the right to wear the scout uniform. 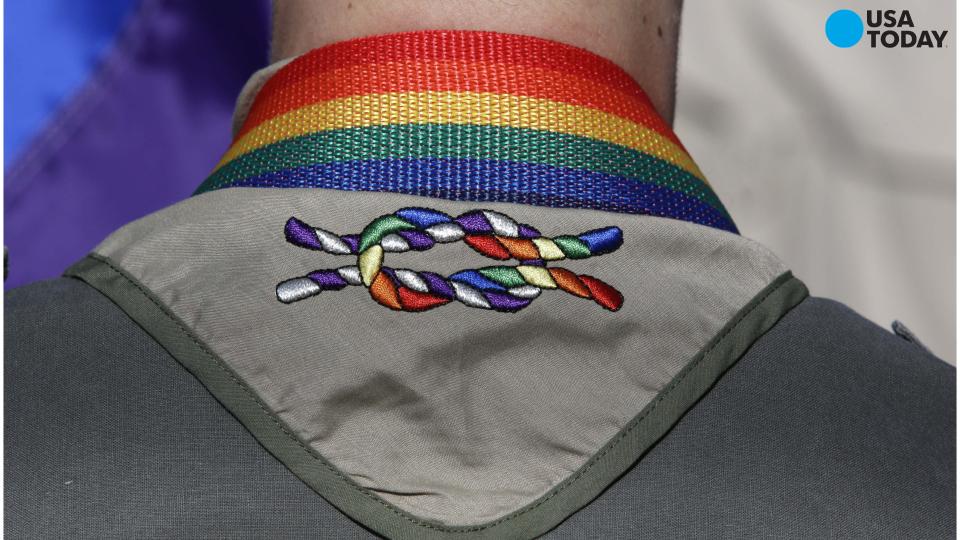 
The Boy Scouts of America on Monday ended its blanket ban on gay adult leaders while allowing church-sponsored Scout units to maintain the exclusion for religious reasons. Wochit


Joshua Kusterer, 12, of Boy Scout Troop 226 in Plano, TX salutes during the "Save Our Scouts" Prayer Vigil and Rally in front of the Boy Scouts of America National Headquarters in Irving, Texas , Feb. 6, 2013.(Photo: Richard W. Rodriguez, AP)


The vote by the Boy Scouts of America's board to lift the organization's ban on gay scout leaders is just the latest chapter in a long history of controversy over who merits the right to wear the scout uniform.
Even as it shifts its policy on homosexual scout leaders, there are still millions of Americans today who are not permitted to become scouts. Namely, anyone who does not hold religious beliefs.
Religion has always been at the center of the boy scouts, whose oath includes a pledge "To do my duty to God and my country." Yet, despite being closely tied to the Protestant-based YMCA, it does not endorse any particular faith. In fact, the organization welcomes two dozen varieties of Christianity in addition to Judaism, Hinduism, Islam, Bahai'ism, Zoroastrianism, and more.
While not discriminating between faiths, those who hold no religious beliefs are not eligible to participate in the Boy Scouts — barring membership to a large and growing demographic. According to a recent Pew poll, nearly 23% of Americans do not identify themselves as religious.
"Ultimately, it would be self-defeating for the Boy Scouts to forfeit the chance to spread Scouting skills and values among the population of people who identify as atheist, agnostic, or otherwise not religious," says Tom Krattenmaker, a writer specializing in religion in public life. "More and more youths are growing up in non-religious homes; why would the organization squander the opportunity to serve and influence these boys?"
USA TODAY
Good Boy Scouts don't need God: Column


While the 80-member board approved a resolution Monday lifting the organization's blanket ban on gay adult leaders, it leaves it up to individual scout units to decide if they will permit gay leaders. "As of this vote, the Boy Scouts of America is an organization that is looking forward, not back," said Zach Wahls, 24, an Eagle Scout and executive director of Scouts for Equality.
But, in allowing individual units to continue to ban gay scout leaders, the Boy Scouts are actually taking a page out if its history, mirroring its handling of racial discrimination for much of the 20th century.
USA TODAY
Boy Scouts of America ends ban on gay scout leaders


Although the organization never openly promoted segregation, it allowed local councils to decide their own policies on race. In the era of Jim Crow, that meant blacks faced an uphill climb in forming troops in the South - and those that were formed were segregated.
There was also opposition to blacks wearing the scout uniform. In one instance, Boy Scout officials in Richmond, Va. threatened to publicly burn scout uniforms if blacks were permitted to wear them, according to David I. Macleod, who wrote a book titled Building Character in the American Body. The book examined the scouts' early history.
The policy of permitting individual troops to discriminate based on race continued until 1974, when the NAACP sued after a 12-year-old African-American boy was denied a position as a patrol leader in a Mormon troop because he was black. At the time, Utah scout troops required that patrol leaders "must be a deacon's quorum president in the LDS Church."
Since blacks were barred from the priesthood in the Church of Jesus Christ of the Latter-day Saints, it effectively meant blacks could not become scout leaders in most Utah troops. The policy was changed and the suit was dropped.
The LDS Church has been one of the leading voices of opposition in the debate over gay scout leaders. "The admission of openly gay leaders is inconsistent with the doctrines of the Church and what have traditionally been the values of the Boy Scouts of America," the Church said in an official statement following Monday's vote.
[h=6]TOP VIDEOS[/h]