(CNN) -- More than 1,000 people were pulled out of the water and off the beach Monday after a great white shark was spotted off the coast of Duxbury, Massachusetts.
The shark, seen from a Massachusetts State Police helicopter, was about 75 yards from the beach. State police immediately notified the Duxbury Police and Duxbury harbormaster, according to the state police.
"It is rather infrequent for us to see a shark within 75 yards in that area," said state Trooper Dustin Fitch. 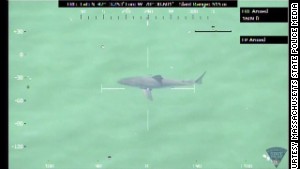 A 12-14 foot great white shark was spotted off the coast of Duxbury, Massachusetts. State Police temporarily closed the beach to swimmers.


Massachusetts Marine Fisheries confirmed the shark to be a great white, approximately 14 feet in length.
State police watched the shark from above while boats from the U.S. Coast Guard, Duxbury harbormaster, Plymouth harbormaster and Marshfield harbormaster scouted the area to make sure there were no more sharks in the water.
Steve Cameron, Duxbury's assistant harbormaster, said it was an unusual sighting since the sharks are usually on the outer cape and not on the inside.
As the harbormaster boats were approaching the area, the shark swam southeast into deeper water, Fitch said.
The beach was later reopened and no injuries were reported.