(CNN) -- The British couple arrested in Spain after pulling their cancer-stricken son out of a Southampton Hospital told a judge they will not return to the UK voluntarily, according to a Madrid court where they appeared on Monday.
Brett and Naghmeh King remain in a Spanish prison while the judge awaits information from a hospital in Malaga about the medical status of 5-year-old Ashya King, who has brain cancer.
His parents can be detained for 72 hours in Spain before the judge has to decide whether they acted illegally when they defied doctors last week, took their son and sparked an international search for the child.
Hotel staff members in Malaga, Spain, recognized Ashya and his family from media coverage and contacted police. Ashya was taken to Materno Infantil Hospital in Spain, and that facility was communicating with University Hospital Southampton, where the boy had been removed by his parents, hospital official said.
Brett King defended his actions in a YouTube video made shortly before his arrest. He accuses two doctors at the British hospital for not allowing him to seek proton beam treatment outside of Britain, even though he said he was ready to pay for the treatment himself. 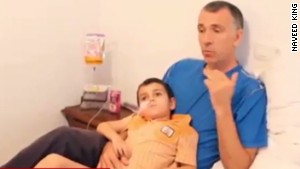 Boy with brain cancer found
"We pleaded with them for proton beam treatment. They looked at me straight in the face and said with his cancer, which is called medulloblastoma, it would have no benefit whatsoever." King said he then looked on the Internet and found sites in the United States, France and Switzerland on proton beam treatment that "said the opposite that it would be beneficial for him."
The Kings traveled to Malaga with their six children to sell a home they own there, in order to "look for better treatment" for Ashya, said their Spanish lawyer, Juan Isidro Fernandez.
The hospital in Southampton issued a statement saying they discussed proton beam radiotherapy with Ashya's parents.
"We very much regret that the communication and relationship with the King family had broken down in this way and that for whatever reason they have lost confidence in us," said Dr. Michael Marsh, medical director at University Hospital Southampton. "Our first concern is for Ashya's welfare"
Marsh said some tumors respond well to proton beam treatment, but "there are some cases where there isn't the evidence that this is a beneficial treatment," he said. The hospital statement did not give specifics about Ashya's case.
The 5-year-old's ordeal has captured the attention of British Prime Minister David Cameron.
"I think people up and down the country will understand and be moved by the grave illness from which Ashya is suffering. The priority must be that he receives the most appropriate care," the Prime Minister's official spokesman said.
Ashya's brother Naveed posted a video on YouTube explaining how the family cared for the sick child while traveling to Spain. "This video shows information that would help in court to show that Ashya was not neglected whilst not in Hospital," the video caption reads.
Only if the Spanish judge decides that the King's acted illegally can the process of extraditing them back to the United Kingdom begin, court officials said.
In the United states, only a handful of hospitals offer proton-beam therapy after surgery, including Massachusetts General Hospital, where the late U.S. Sen. Ted Kennedy was treated for brain cancer in 2008. He died just a year after his surgery for malignant glioma.
That surgery was followed by six weeks of radiation. Kennedy wrote about his experience in a Newsweek magazine article at the time that he underwent proton-beam therapy.
The theory behind proton therapy is that its high-energy particles zone in specifically on the tumor and so do not harm the surrounding healthy tissue as much as the X-ray photons in conventional therapy, said Dr. Donald O'Rourke, associate professor of neurosurgery at the University of Pennsylvania School of Medicine.
CNN's Joyce Joseph and Taylor Phillip contributed to this story