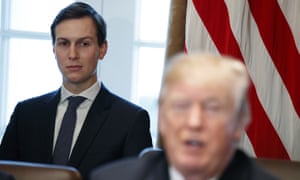 Jared Kushner said Democrats who call the president a racist are doing ‘a disservice to everyone who suffers from real racism in this country’. Photograph: Evan Vucci/AP
Show
Times investigation uncovers "alarmingly inappropriate" behavior from Transportation Secretary Elaine Chao

Trump Transportation Secretary Elaine Chao asked federal officials to organize travel arrangements for at least one family member and include other relatives in high-level meetings with Chinese government officials during her first visit to China as a Trump cabinet member, The New York Times reported on Sunday.

“She had these relatives who were fairly wealthy and connected to the shipping industry,” said a State Department official. “Their business interests were potentially affected by meetings.” The trip was reportedly canceled by Chao after ethics concerns were raised with the State and Transportation Departments.

This was “alarmingly inappropriate,” according to David H. Rank, a State Department official who previously served as deputy chief of mission in Beijing.

Eric Lipton (@EricLiptonNYT)
The NYT heard way back in Oct 2017 that State Depart. officials had raised ethics concerns abt a pending trip by DOT Sec. Elaine Chao to China. After we asked abt the trip, it was cancelled. We sued State Depart to get the emails. Here is the result https://t.co/fsMdwZsPMp

Chao, who is married to Senate majority leader Mitch McConnell, is a member of a wealthy and powerful family in China with respect to their ownership of an American shipping company. The reported arrangements were revealed as part of a Times investigation into close business ties between China and the Chao family’s business.

Chao herself has no formal role at the company, by McConnell has received millions of dollars in gifts from Chao’s father, James, who ran the company until last year.

Remember a few months back when- at that time - rising Democratic star Beto O’Rourke and Donald Trump held dueling rallies in El Paso? 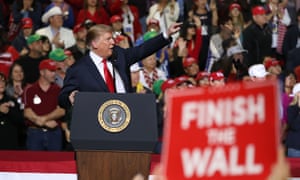 Well, the bills to both campaigns from the city are now due, and according to ABC News, only one has paid it.

“El Paso billed Donald J. Trump for President Inc. for his “Make America Great Again” rally -- for nearly half a million dollars. The invoice was sent to the campaign’s Fifth Avenue offices in New York on March 27. It was due April 26, and El Paso has yet to see a dime,” ABC reported.

The exact number is $470,417.05, broken down by reimbursements owed to six city departments.

The report continues: “If El Paso doesn’t receive payment from the Trump campaign, that money would come out of municipal revenue and the city’s contingency budget -- funds used for unexpected and emergency situations, like natural disasters. Just last June, historic and deadly flooding ravaged southern Texas. Now, as tornado alley wakes up, and hurricane season looms -- that’s a financial life vest no city wants to do without.

Federal workers, who recently had their income disrupted by the longest government shutdown in US history, could be getting a raise next year.

The Hill reports that House Democrats are proposing a 3.1 percent pay hike for federal workers in 2020.

The raise was included in the draft appropriations bill covering financial services and general government, which is expected to advance through a subcommittee hearing on Monday and advance to the House floor later in the month.

Donald Trump arrived in the UK for a state visit just about an hour ago, and set a combative tone by criticizing the London mayor as his plane landed.

After Air Force One touched down at Stansted, the US president and his wife, Melania, were greeted by the foreign secretary, Jeremy Hunt, one of the contenders in the Conservative leadership race to replace Prime Minister Theresa May.

Trump was seen chatting with Hunt for a minute and occasionally patting him on the back. Before landing, Trump described Sadiq Khan as “a stone cold loser” after the London mayor compared him to a 20th-century fascist.

Khan’s spokesman said “childish insults” should be “beneath the president of the United States”.

You can follow Trump’s state visit on its own liveblog here.

Homeland Security Committee Chairman Bennie Thompson said yesterday on MSNBC that impeachment proceedings are “absolutely” inevitable, and rejects the idea that backlash over impeachment could cost Democrats control of Congress in 2020.

“I think we risk losing majority if we don’t bring impeachment proceedings. It will be hard pressed for a Democratic majority in the House of Representatives not to go forward with an impeachment operation.”

Good morning. Let’s start off the week with a masterclass in deflection.

For that we turn to first son-in-law and trusted Trump advisor Jared Kushner in an interview with Axios released Sunday. Asked about the president’s racism, Kushner said confidently that Trump was “absolutely not” a racist, and that Democrats who call the president a racist are doing “a disservice to everyone who suffers from real racism in this country.”

Interviewer Jonathan Swan interjected by pointing to birtherism - Trump’s first foray into US party politics as an agent of the disproven idea that Barack Obama wasn’t born in the US.

You may be forgiven if what followed gives you the sensation of being stuck in a time loop.

Kushner: “I wasn’t really involved in that.”

Kushner: “Like I said, I wasn’t involved in that.”

Swan: “I know you weren’t. Was it racist?

Kushner: “I know who the president is and I have not seen anything in him that is racist.”

Axios (@axios)
Jared Kushner deflects when asked if he disapproves of Donald Trump's promotion of birtherism, saying he wasn't involved with it. @dctvny @hbodocs pic.twitter.com/D2wINVHLIx

In the interview Kushner, who has been broadly tasked with facilitating peace in the Middle East also cast doubt on Palestinians ability to self-govern. Asked whether he understood why the Palestinians might not trust him, Kushner said: “I’m not here to be trusted.”

Kushner also sidestepped questions about the US policy over the death of Jamal Khashoggi, the Washington Post columnist murdered by a Saudi government hit squad in Turkey.

Asked if he joined Khashoggi’s fiancee in calling on the Saudi government to release his body (or identify where they put the body parts) so his family might bury him, Kushner said: “Look, it’s a horrific thing that happened. Once we have all the facts, then we’ll make a policy determination, but that would be up to the secretary of state to push on our policy.”

More on this story