A new study discovers sharks in Greenland can live up to be 400-years-old, making them the longest-living vertebrates on the planet.

A Greenland shark slowly swimming to the deep and cold waters of the Uummannaq Fjord in northwestern Greenland. This shark and others were part of a tag-and- release program in Norway and Greenland.(Photo: Julius Nielsen)


The Greenland shark has long been belittled as sluggish, homely and dim-witted. But now the species can demand respect: scientists say it is the planet’s longest-lived vertebrate, or animal with a backbone.
Eight of 28 Greenland sharks profiled in a new study in today’s Science were 200 years or older, by scientists’ best estimates. One enormous female was aged at least 270 when she was caught - and she may well have been 390. That would make her possible<span style="color: Red;">*</span>birth date<span style="color: Red;">*</span>in the era of Rembrandt and Galileo.
Even the study’s authors were astonished by the results, which allow the humble Greenland shark to steal the longevity prize from the bowhead whale, the previous record-holding vertebrate. The oldest bowhead reached<span style="color: Red;">*</span>a mere 211 years.
The study turned up such mind-boggling ages that the scientists “kept checking the math,” says study author Peter Bushnell of Indiana University South Bend. “Typically nothing except for trees lives this long.”
The Greenland shark has all the hallmarks of an animal that survives to extreme old age, says Jelle Boonekamp of the Netherlands’ University of Groningen, who was not associated with the study. For starters, females can stretch 15 feet, which is longer than a station wagon. Those proportions mean the shark has few predators.
The Greenland also has a low metabolism, befitting the ultra-cold northern waters where it’s most often found. It putters along at less than half a mile per hour, “the tortoise of the undersea world,” says Chris Harvey-Clark of Canada’s Dalhousie University, who wasn’t part of the study. 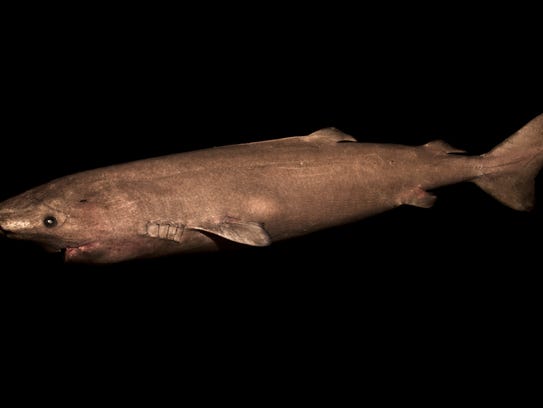 The biggest sharks probably “don’t have to eat every day. They might just have a big meal once or twice a year,” hypothesizes study co-author Julius Nielsen of Denmark’s University of Copenhagen. That meal most often consists of seal or large fish, but the Greenland is not above gulping down carrion, from dead reindeer to chunks of moose.
To reveal the shark’s age, Nielsen and his colleagues studied the eyes of almost 30 Greenland sharks, nearly all caught accidentally by fishing boats or scientific surveys. A section of the shark’s lens forms when the animal is in utero. The researchers measured this section’s levels of radioactive carbon, a method often used to date archaeological samples, and extrapolated to the year the sharks were born.
But doing so required the assumption that a Greenland shark’s size is a key to its age, and<span style="color: Red;">*</span> “we know that size is not a particularly good predicator of age for just about any fish you want to look at,” says Simon Thorrold of the Woods Hole Oceanographic Institution, who did not participate in the study. The authors’ age estimates, he says, are “a bit of a stretch.” Nielsen responds that his team’s calculations show that in most of the sharks he and his colleagues studied, age and size are closely related.
Whether the hoariest Greenland sharks are really four centuries old or half a century old, Thorrold says the study does make a good case that the animal can reach ages of 60 and up. That insight alone is valuable, he says, because industrial fishing could easily wipe out such a long-lived fish.
The Greenland’s life and ways are so mysterious that any new information is useful for conserving the species, which fishermen often regard as a pest, the study’s authors say. 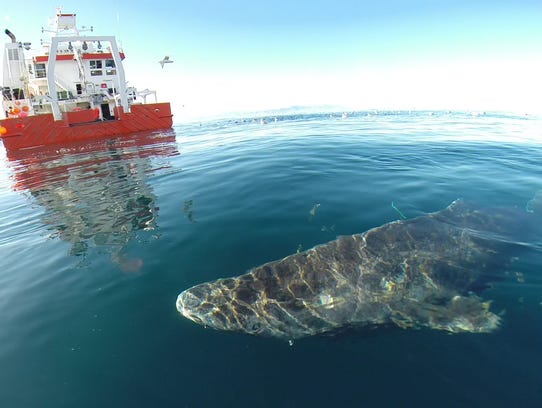 A Greenland shark near the surface after its release from research vessel Sanna in northern Greenland.<span style="color: Red;">*</span>(Photo: Julius Nielsen)

“Of course, it’s very unfortunate for the sharks that we are accidentally catching them,” Nielsen says. But “it’s a very good investment. … We are really doing a lot of good for these sharks.”