74 [h=6]Share This Story![/h]Let friends in your social network know what you are reading about 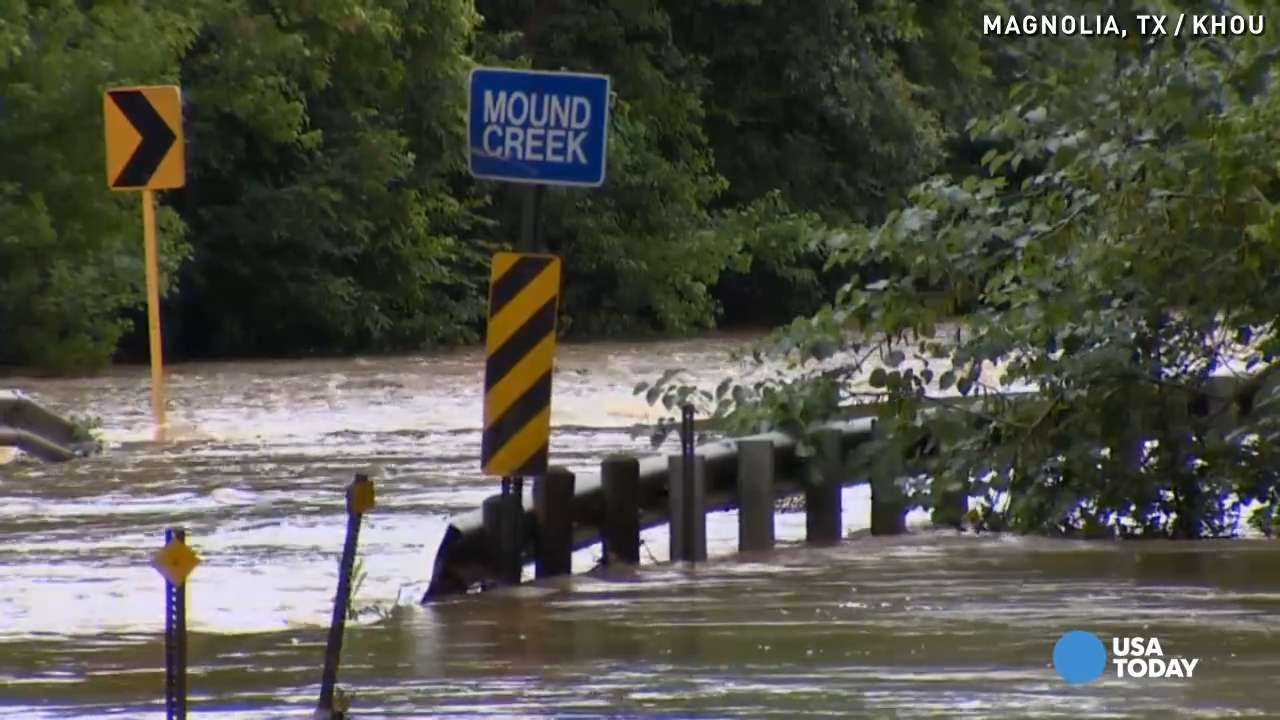 
Flood waters have isolated some areas in Texas such as Magnolia, where residents are trapped in homes on the wrong side of low-lying roads. VPC


Authorities called for an evacuation of Horseshoe Bend, Texas, because the Brazos River is expected to flood.(Photo: Rodger Mallison, AP)


PARKER COUNTY, Texas — At Horseshoe Bend in Parker County, residents hope luck isn't running out. The community of several hundred trailers and RVs sits on the banks of the swollen Brazos River.
County Judge Mark Riley ordered Horseshoe Bend be evacuated by 8 p.m. CT Wednesday, along with other low-lying neighborhoods. Officials cannot force residents to leave, but Riley said the river could rise another nine feet by the time it crests.
"Water could be up to the top of the carport," said David Cantu, as he hitched up his RV to haul it to higher ground. "All these structures could be gone."
The storms that produced the flooding were part of a system that stretched from Mexico into the central USA. The death toll from the system climbed to 35 — 14 in Mexico, 17 in Texas and four in Oklahoma. The Houston area alone had seven storm-related deaths.
USA TODAY
Another Texas city threatened by rising water


This has been the wettest month on record for Texas, and there are still several days left. The state climatologist's office said Wednesday that Texas has gotten an average of 7.54 inches of rain in May, breaking the old record of 6.66 inches, set in June 2004.
Texas has been hit with almost continuous storms for the past week to 10 days. The wettest area has been from Dallas-Fort Worth to the Red River, where some places have gotten more than 20 inches of rain.
Down in south Texas, Wharton Mayor Domingo Montalvo issued a call at 5 p.m. Wednesday for a voluntary evacuation of the west side of the city of 8,800 because of the predicted rise of the Colorado River, which has seen flash flooding in the Austin and Texas Hill Country sections of its watershed upstream.
USA TODAY
Texas flood's climate change irony: Column


The National Weather Service reported the river level at Wharton was almost 36 feet at 2 p.m. Wednesday. Flood stage is 39 feet. The river was expected to top that level Wednesday night and not crest until it reaches almost 46 feet Friday evening. That would flood many homes in the area with up to 2-3 feet of water and isolate and flood a school.
More rain fell on the hard-hit Houston area, temporarily complicating the cleanup a day after a downpour of nearly a foot triggered the worst flooding the nation's fourth-largest city has seen in years. Hundreds of homes were damaged. 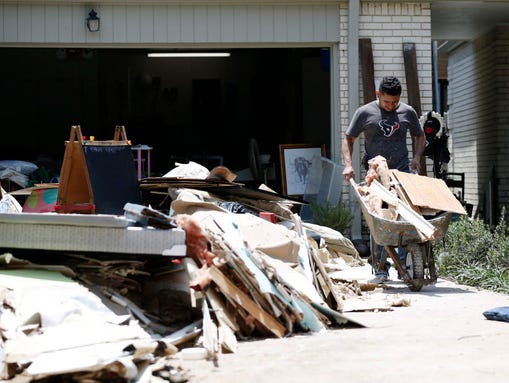 Houston Mayor Annise Parker said two people whose boat capsized during a rescue were missing. Another person was missing in suburban Houston.
The body of Alice Tovar, 73, of Rosenberg, who was swept away by floodwaters Tuesday, was found by her brother-in-law along a creekside fence late Wednesday afternoon. 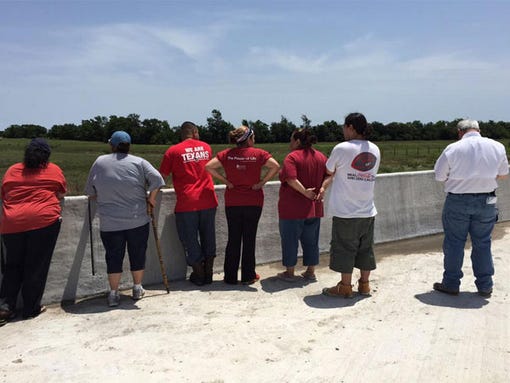 "I'm just in shock to see her like that," said Ricky Aguilar. "We went all through the woods all day looking for her when she was right there all along."
Tovar was reported missing Tuesday when her family learned she didn't show up for work at a nearby gas station. Her car was later found by her daughter, but Tovar had been swept away.
And in Central Texas, crews resumed the search for eight people feared dead after the swollen Blanco River smashed through Wimberley, a small tourist town between San Antonio and Austin, over the Memorial Day weekend.
Authorities recovered the body of a boy from the Blanco late Wednesday evening. A Hays County statement says it's unclear whether the child is on the county's list of those missing from the storm.

Alaena Tate, a member of a search and rescue team, looks through debris for people who were still missing after heavy flooding Wednesday, May 27, 2015, around Umphery Ranch located between Wimberley and San Marcos, Texas.<span style="color: Red;">*</span>(Photo: Gabe Hernandez, AP)

Earlier Wednesday, county authorities identified Jose Alvardo Arteaga-Pichardo and Michelle Carey-Charba as two of the area's flood victims. Arteaga-Pichardo's body was found near Loop 165 in Wimberley Tuesday afternoon, and Carey-Charba's body was found Tuesday morning in Caldwell County.
A third person was found dead in San Marcos Saturday. Hays County officials identified the body Wednesday evening as Dayton Larry Thomas, 74.
Wimberley saw some of the heaviest damage, including the loss of a two-story vacation home that was swept downstream and slammed into a bridge. Eight people in the home went missing, including three children.
Aerial crews are searching for the missing using drones, geographic information system mapping and thermal imaging. Many areas are still not accessible by search crews due to damage.
More than 50 people from Texas Task Force One are forming search teams on the ground. Public works teams are also being deployed by the state. According to police, those teams will be in Hays County for at least the next two weeks.
USA TODAY
In Texas, flooding leaves disaster in its wake


As volunteers and help poured in, the state Bar of Texas set up a free legal hotline to assist low-income residents with issues like replacing lost documents, insurance questions, landlord issues, or any kind of scams during the recovery process.
Airbnb is offering all of its room-booking services free of charge for flood victims until June 9 at multiple places in Austin, San Antonio and parts of south Texas.
And KVUE-TV set up a gofundme page to collect money for Hays County flood victims.
President Obama pledged federal funding for affected areas Tuesday while Texas Gov. Greg Abbott has declared more than 45 counties disaster areas.
"It's important that we remember this flood for years to come so that we don't take things lightly. One of our greatest problems has been getting people to understand how devastating a flood is. It costs lives and property. People are ... it will change them forever," said Hays County Judge Bert Cobb. 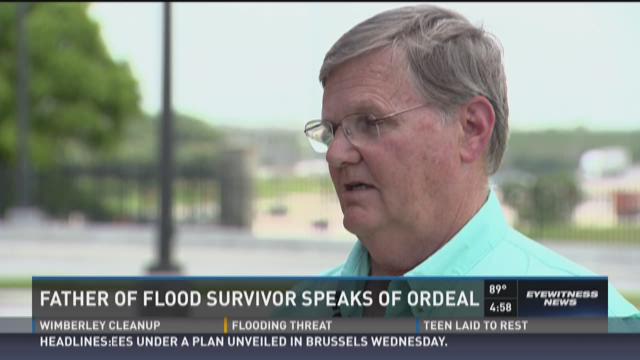 Joe McComb said he is just thankful his son Jonathan survived Saturday night's flooding in Wimberley.
It's looking like his daughter-in-law Laura and his two grandchildren, 6-year-old Andrew and 4-year-old Leighton, may not have.
The McComb family, as well as five others, were swept downstream and the floodwaters knocked a home they were all in, off its foundation and into the swift water. Jonathan McComb told his father he survived by swimming, not knowing at times if he was right-side up or not.
Once he finally managed to reach shore, McComb had been swept roughly 12 miles downstream.
"He did get up enough and saw a light at somebody's house," Joe McComb said. "(He) crawled over there, knocked on the door and told them, 'Our house just got washed away. I need help.' and pretty much then his energy level just collapsed."
Jonathan McComb, who received a broken rib and collapsed lung, may be released from the hospital as early as the weekend, his father said.
"The only way a person can go through this, in my opinion is that if they've got a deep faith in God," Joe McComb said.
The family is holding onto that faith and praying for good news about Laura and the kids.
"If the Lord feels like that we're to continue to have them, then that miracle will be provided," McComb said. "If not, heaven's going to be benefited by their presence because they're wonderful children."
Contributing: KHOU-TV, Houston; KVUE-TV, Austin, and The Associated Press
0) { %> 0) { %>
0) { %>