Audio for this story from All Things Considered will be available at approximately 7:00 p.m. ET. 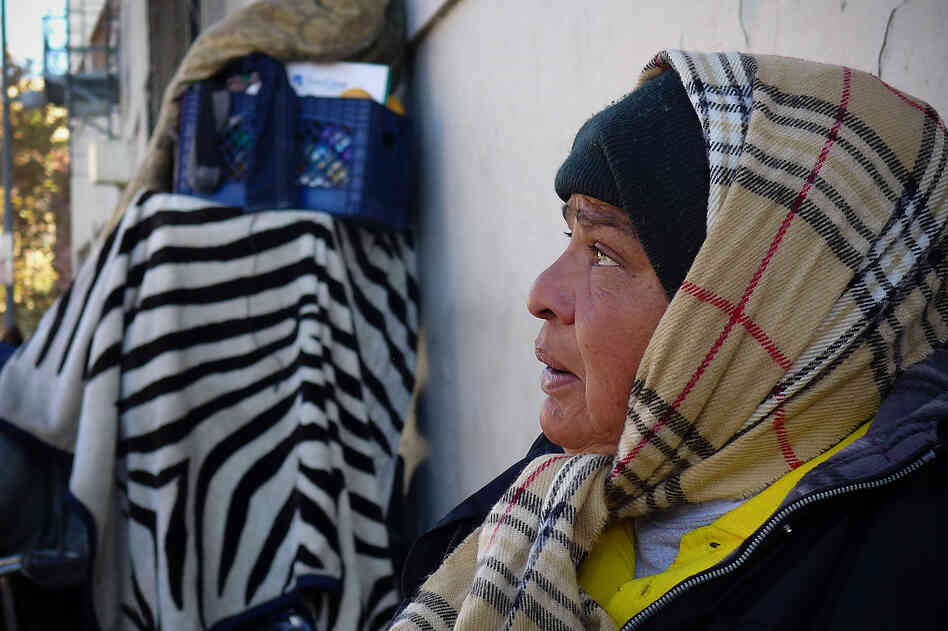 i i
hide captionMartha Castro lives on the streets in Los Angeles' Skid Row neighborhood. She's still resistant to the idea that she can now get health coverage because of California's expansion of Medicaid.

If you were led blindfolded a few blocks east from Los Angeles' grand City Hall, you would know instantly when you entered Skid Row.
There is the pungent smell of urine and marijuana smoke, and the sound of music and easy laughter — a carnival rising out of misery.
This is the chaos that Chris Mack plunges into on most days. Once homeless himself, Mack is an outreach worker for the JWCH Institute's Center for Community Health, a free clinic in the heart of Skid Row.
Mack is part of a concerted push to enroll the nation's homeless in Medicaid. As of January, the health insurance program that's jointly funded by federal and state governments is being opened for the first time to all poor adults, not just those with disabilities or dependent children.
The outreach is important, homeless experts say. In addition to safe permanent housing, regular medical care is a critical intervention for getting lost lives back on track.
"A person who is not feeling very well can't behave or perform very well," Mack says, "so I think health care is primary."
The Medicaid expansion was a central provision in the Affordable Care Act, the federal health care law. But after the Supreme Court declared the expansion optional for states, rather than mandatory, 26 states and the District of Columbia have chosen to do so. Even without all the states participating, some 9 million people are expected to enroll in Medicaid across the country, and 1.2 million homeless people could be newly eligible for coverage.
Homeless advocates have cheered the expansion. Men and women living on the streets and in shelters will be able to see a doctor regularly, keep prescriptions filled to treat their asthma, diabetes and schizophrenia, and get referrals to private specialists for lingering ailments.
'Ugly Reality'
Mack's journey through Skid Row is an arduous, even perilous undertaking: Some 54,000 people live on the streets in Los Angeles, and, as elsewhere in the nation, up to 80 percent are mentally ill or addicted to drugs or alcohol. That makes enrolling them in a complicated public insurance program all the more difficult.
“ "A person who is not feeling very well can't behave or perform very well, so I think health care is primary.

"Sometimes, on certain streets, people are following their habit, smoking or drinking or shooting up," says Mack. "That's part of the ugly reality.
Mack greets a woman perched on an upside-down plastic bucket, with a Burberry scarf covering her head. Her eyes are clouded with drink or drugs, and her cheeks are smeared with ash. She tells Mack that her name is Martha Castro, that she's slept on the streets for four years, and that she has been to the doctor just once for a lung infection.
"Do you realize that you can have health insurance?" Mack asks her.
"No, I don't want to apply for nothing else right now," Castro replies in a slur of words and confusion.
She is adamant that, at 64 years old, she's healthy enough. And anyway, she says, she doesn't have any identification or money. "So then, how we gonna have insurance for the clinic?" Castro asks.
I tell her the insurance – Medicaid — is free to her, and she doesn't need an ID card. But that doesn't matter to Castro, who is high or drunk and perhaps touched by mental illness. "That's it," she says, signaling that the conversation is over.
Mack says he can't force anyone to sign up — even someone like Castro, who he suspects has chronic asthma. "You see what I did?" he says to me. "I left the door open — 'Martha, if you need help, you can come to us.' "
Some Saying 'Yes, Please' To Insurance

i i
hide captionGeorge Farag is homeless and looking forward to gaining health insurance, after being unemployed for two years.

In a city crowded with chauffeur-driven, black SUVs and upscale hotels, Los Angeles' homeless are a reminder of life's cruel turns. For George Farag, an Egyptian immigrant and former security guard, that cruel turn came when he fell asleep one night on the job.
"I work in security before. I sleep on the job. Kick me out," says Farag, standing in the lobby of the John Wesley Community Clinic. As if to prove the veracity of his story, he shows me the emblem embroidered on his shirt: It's his old company's logo.
"After me lost the job, I lost everything," Farag says. "I sleep on the city two years."
One of those nights sleeping on the streets, he says, someone ran over him. A hit-and-run that crushed his right leg. He's come to the JWCH clinic before for the occasional prescription, but on this day he's signing up for Medicaid.
Through an opening at the glass enrollment window, a clinic worker hands Farag a copy of his new insurance forms, and he stuffs them into a worn plastic bag.
"God bless you," Farag says through the window. Once he is enrolled, the clinic will coordinate his medical needs, and perhaps do something about the makeshift brace on his leg.
Dr. Dennis Bleakley has been treating Skid Row patients at the clinic for more than a decade. Before, he says, uninsured homeless adults, like Farag, had little access to specialists. Fractured bones, bulging hernias, diseased hearts — all of these things went untended.
"Now, at least you have a reasonable length of time [with a patient] and access to specialists," Bleakley says. "It's going to open up a whole new world for us.
But even with new services available to them, the homeless will remain some of the toughest, most confounding patients. Disorder and addiction easily sabotage the best laid plans, and those who work with the homeless acknowledge that few make it out.
That sobering reality doesn't stop Mack, the outreach worker, who heads back out on the street to find people who might qualify for Medicaid. He's like a rescue diver plunging into a roiling ocean to bring those who've fallen overboard back to safety — again and again.