(CNN) -- Al-Shabaab, the al Qaeda-linked militant group active in Somalia, is not responsible for a terrorist attack in Kenya's coastal town of Mpeketoni that killed at least 48 people, Kenyan President Uhuru Kenyatta said Tuesday.
Instead, he blames local political networks for the attack Sunday that witnesses say turned a World Cup viewing party into a bloodbath. Armed men stormed the city center, shooting and hacking people to death before moving into a residential area, where they went from door to door, the witnesses said.
"The attack was well planned, orchestrated and politically motivated ethnic violence against the Kenyan community with the intention of victimization for political reasons. This therefore was not an Al-Shabaab terrorist attack," Kenyatta said. 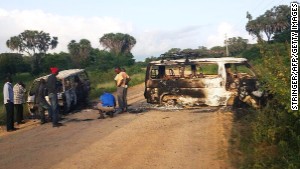 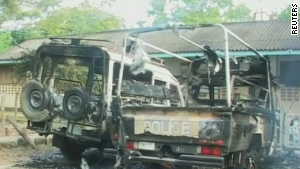 Gunmen attack Kenyan town
The heavily armed gunmen, many in military uniforms, attacked hotels, a restaurant, gas station, bank, police station and a government office, according to the Kenyan Red Cross. Video from the scene showed burned-out vehicles and walls pockmarked by bullets.
"Those unwilling to work to unite Kenyans will not have the space, nor the room, for hate speech," Kenyatta said.
There were no claims of responsibility for the attack, but the Kenyan Disaster Operation Centre had blamed it on Al-Shabaab.
Mpeketoni sits to the west of the Kenya-Somalia border, where the Kenyan army is fighting troops loyal to the al Qaeda-linked militant group.
READ: Explosions in Kenya leave at least 10 dead, officials say
READ: New Kenya law legalizes polygamy; women's group applauds it
CNN's Joyce Joseph, Lillian Leposo, Ralph Ellis and Azadeh Ansari contributed to this report.