Reports: Chicago cop to be charged with murder

21 [h=6]Share This Story![/h]Let friends in your social network know what you are reading about

[h=4]Reports: Chicago cop to be charged with murder[/h]Mayor Rahm Emanuel spoke with community leaders ahead of release and urged potential protest to be "focused." 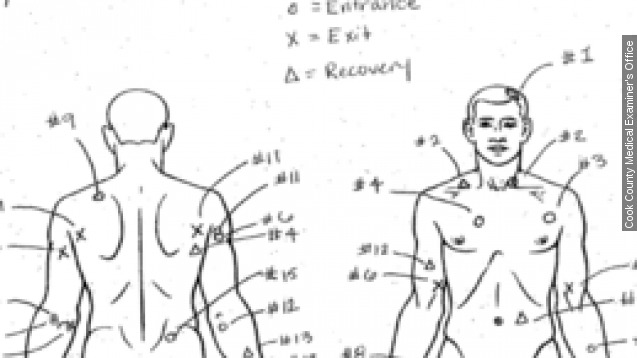 
Those who have seen the dashcam video have described it as extremely graphic and said it shows an execution-style killing. Newslook


This autopsy diagram shows the location of wounds on the body of 17-year-old Laquan McDonald who was shot by a Chicago Police officer 16 times in 2014.(Photo: AP)


Following Valderrama's order, Emanuel said he hoped it was enough time for prosecutors to bring their year-long investigation of an officer "who violated that (public) trust at every level" to a conclusion "so Chicago can begin to heal."
A federal law enforcement official familiar with the investigation, who asked not to be identified because the probe is ongoing, told USA TODAY on Monday that it is unlikely that the federal investigation would be completed ahead of the release of the video footage. Tandra Simonton, a spokeswoman for the Cook County State's Attorney's office, said the state probe was ongoing. She declined to say whether the agency's criminal investigation would be completed prior to the video's release.
Van Dyke's attorney, Daniel Herbert, did not respond to requests for comment.
Attorneys for McDonald's family and Van Dyke have viewed the footage and described the content as graphic and unsettling. Police had said they were pursuing McDonald after receiving a 911 call from someone who said that a knife-wielding man had threatened him and appeared to be trying to break into cars.
A police union official also said shortly after the incident that McDonald, who had PCP in his system at the time of his death, was acting erratically and that Van Dyke felt his life was in jeopardy.
While Van Dyke repeatedly fired at McDonald, five other police officers at the scene did not fire their weapons. Michael Robbins, an attorney for the McDonald family, said that the video shows the teen was walking away from the officer when gunned down.
Chicago's city council in April approved a $5 million settlement be paid to the McDonald family. Van Dyke has been stripped of his police powers and placed on desk duty since the incident more than a year ago.
Rev. Jedidiah Brown, a pastor and activist who attended two meetings Emanuel held on the video on Monday, said the mayor "still ain't saying the right things as far as I'm concerned."
"We told him, 'I<span style="color: Red;">*</span>understand you got to deal with a bureaucracy, but we can't feel the heart of our mayor," said Brown, who endorsed<span style="color: Red;">*</span>Emanuel's<span style="color: Red;">*</span>reelection effort earlier this year. He added that the mayor was told, "We don't know if you're sorry that this happened, or<span style="color: Red;">*</span>if you're sorry we're about to find out how bad it really was."
Thayer said that Emanuel and Chicago Police Superintendent Garry McCarthy should also be held responsible for McDonald incident and criticized the administration for resisting release of the video.
The mayor, who won a second term in April, has faced criticism from some activists for doing too little to address distrust in the African-American community about the police department.
USA TODAY
Chicago politicians frustrated over homicides, call for top cop's ouster


Earlier this year, an off-duty Chicago police officer, Dante Servin, was acquitted for the fatal shooting of 22-year-old Rekia Boyd, who was wounded in the back of the head. McCarthy announced late Monday that he would move to fire Servin.
The department agreed in August to begin tracking all street stops of citizens by its officers and improve training procedures after an ACLU study showed that 72% of "stop-and-frisk" searches in the city were conducted on African-American men.
At least a dozen black alderman also called for McCarthy's ouster last month, citing a rising homicide rate in the city and complaining that the superintendent hasn't hired and promoted enough African-American officers.
"If Rahm Emanuel wants to look at why there might be a problem with violence when this video is released, he needs to look in the mirror," Thayer said.
Fresco Steez, an organizer with the Black Youth Project 100, said members were invited to take part in Monday's call and meeting with Emanuel to discuss the release of the video but declined.
Activists with BYP100 and other groups complained on Monday that the administration has been indifferent to concerns of young minorities in the city.
Steez noted that Emanuel closed 50 schools in predominantly black and Latino neighborhoods during his first term, and was slow to respond after a group of residents went on a hunger strike this summer over a plan, now partially reversed, to close a high school in a predominantly African-American neighborhood on the city's southeast side.
"We don't have faith that the same man who would allow people to starve for 34 days over a school closing will be accountable," Steez said in an interview.
0) { %> 0) { %>
0) { %>