Michael Wolff is back and not with a whimper. The latest installment of his Trump chronicles picks up where Fire and Fury ended. Once again, it leaves the president bruised and readers shaking their heads.

As Wolff describes it, Donald Trump calls Kushner “a girl”. As for his vice-president, he’s a “religious nut”. “Why does he look at me like that?” Trump asks about Pence’s beatific gaze. As for Pence’s wife, Karen? “She really gives me the creeps.”

Steve Bannon supplies a running commentary for which Wolff calls him his Virgil. Like Dante’s Inferno, Siege ends on hell’s bottom rung.

Wolff’s tale is credible enough to be taken seriously and salacious enough to entertain. If you have doubts about Wolff’s credibility, and many do, the latest blowup over the USS John S McCain is one more reminder that in the Age of Trump, truth is weirder than fiction. Much weirder.

Beyond that, by early 2018 Wolff had captured the centrality of Robert Mueller in Trump’s life, and nailed Trump’s and Kushner’s insatiable cravings for cash. Fire and Fury records Bannon as saying: “This is all about money laundering … It goes through Deutsche Bank and Kushner and all that shit.” Talk about getting the big picture right.

This time, Wolff finds himself pitted against the special counsel’s office, as to whether Mueller’s team drew up or had drawn up a three-count indictment against the president in March 2018. Team Mueller has issued something other than a categorical denial: “The documents that you’ve described do not exist.” Let us parse.

Note the expression “documents that you’ve described”. Note the use of the present tense. As an impeached former president said: “It depends on what the meaning of the word ‘is’ is.”

Regardless, Wolff’s guide, the major-domo of Trump’s 2016 campaign who became a White House adviser until he wasn't, enjoys tweaking his former boss. Bannon volunteers that he helped concoct the story that the Mueller investigation was the demon spawn of the “deep state”, and says there was never much substance to it.

As Wolff tells it, “among the nimblest conspiracy provocateurs of the Trump age, Bannon spelled out the … narrative in powerful detail”. But then Bannon’s voice pierces his own self-generated din: “You do realize … that none of this is true.” Allow that one to sink in.

Wolff also has Bannon calling the Trump Organization a criminal enterprise and predicting its downfall: “This is where it isn’t a witch-hunt – even for the hardcore, this is where he turns into just a crooked business guy … Not the billionaire he said he was, just another scumbag.” Allow that to sink in, too.

Expect Bannon to be quoted by Nancy Pelosi, Jerry Nadler, Alexandria Ocasio-Cortez and the eventual Democratic candidate. Also look for the Democratic National Committee to send chocolates to Bannon, once head of Breitbart and a partner in Cambridge Analytica, next Easter.

More broadly, Wolff injects that “Trump measured loyalty, that significant currency of his business and walk-on-the-wild-side lifestyle, by who was so dependent on him, and as clearly exposed as he was, that they would of course lie for him”. Said differently, there are ample reasons as to why Mueller refused to give Trump anything approaching a clean bill of health on the issue of obstruction of justice.

Siege also ladles out what we have come to expect from deep dives into Trumpworld – sex (real or imagined), race and religion.

Wolff reports of Trump bragging to others of a dalliance with the former United Nations ambassador Nikki Haley and of his supposedly “banging” a junior White House staffer who had “a way about her”.

Wolff badly burned himselfwhen he first raised the notion of a Trump-Haley affair.Haley herself angrily and adamantly denied it.

As for the unnamed White House staffer, Wolff ponders: “Locker room talk? Or all part of a new alternative reality that only he seemed to be living in?”

Still, Trump can count on the Rev Franklin Graham leading our nation in prayer on Sunday 2 June, on behalf of its beleaguered leader. That is two days before Wolff’s book comes out.

Bannon refuses to rule out that Trump is a racist. As for antisemitism, Bannon doesn’t think so. But Wolff has his doubts.

The author reports a Trump fantasy concerning Allen Weisselberg, an Orthodox Jew and the Trump Organization’s chief financial officer. Weisselberg has reportedly cooperated with law enforcement. In turn, Wolff writes, Trump has “developed a riff on the horrors that an Orthodox Jew would probably encounter in jail, one that sketched a vivid picture of a tattooed Nazi cellmate”.

Catholics come in for their share of distrust and scrutiny, too. After Trump nominated Brett Kavanaugh to the supreme court, in Wolff’s telling the president became sensitized to the absence of a lifelong Protestant on the highest court. 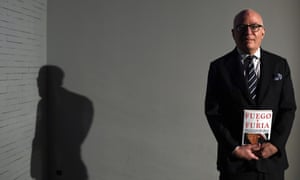 Michael Wolff poses for the promotion of the Spanish version of Fire and Fury. Photograph: Gabriel Bouys/AFP/Getty Images

According to Wolff, Trump began to suspect that he was being played by McGahn, his lawyer, and by Leonard Leo of the Federalist Society who was purportedly a member of Opus Dei, a traditionalist Catholic group. Specifically, Wolff writes, Trump started to ask whether Kavanaugh was the end product of a Catholic plot to abolish abortion. Trump is not so pro-life. Who’d have guessed?

Wolff’s Trump also blamed his nominee’s weepy persona on the church. “He seems weak,” the president is quoted as saying. “Not strong. He was probably molested by a priest.”

Robert Mueller made clear: he couldn't have indicted Trump even if he wanted to Lawrence Douglas
Read more

On that score, Wolff quotes a stinging rebuke by Henry Kissinger at a small lunch attended by Rupert Murdoch, among others: “The entire foreign policy is based on a single unstable individual’s reaction to perceptions of slights or flattery. If someone says something nice about him, they are our friend; if they say something unkind, if they don’t kiss the ring, they are our enemy.”

After the Guardian published its initial report on Siege, a loyal administration veteran sent a text to this reviewer.

“Why,” it read, “isn’t anyone writing the story that the Mueller investigation [was] designed as a cloak/shield”, as a plot to “overthrow a duly elected president”. To the response that people the individual had worked with had spoken to Wolff on the record, and that the Guardian had not written Siege, thewas terse: “Got it.”

Doubtful. On Wednesday, Mueller told the world that if his office believed Trump had not obstructed justice, he would have said so. As Michael Wolff returns to torment Donald Trump, the sword of impeachment dangles more ominously than ever.