2 [h=6]Share This Story![/h]Let friends in your social network know what you are reading about


27-year-old Quinton Tellis was indicted on capital murder in the death of Mississippi teen Jessica Chambers. Chambers was burned alive in 2014 and the investigation gained nation-wide attention. VPC


Jessica Chambers(Photo: Special to The Clarion-Ledger)


JACKSON, Miss. — A man suspected in another homicide has been indicted in the December 2014 burning death of Mississippi teen Jessica Chambers.
Quinton Tellis, 27, originally of Courtland, was indicted on capital murder charges by a special grand jury in Panola County as he sat in the Ouachita Parish Jail in Monroe, La., where he is being held on charges connected to the August 2015 death of a University of Louisiana Monroe exchange student.
Tellis is believed to have been the last person to have been with Chambers the night she was killed. The two allegedly had a relationship in the weeks leading up to her death, officials said.
While Chambers and Tellis were eight years apart in age, they both went to South Panola High School and grew up in the same neighborhood.
A news conference concerning the case scheduled for Wednesday morning at the Panola County Sheriff's Department in Batesville, according to District Attorney John Champion and Sheriff Dennis Darby. 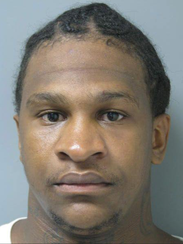 More than 14 months ago, authorities discovered the blonde ex-cheerleader from Courtland, who had been set on fire. She was found on the road with burns over most of her body. She died a few hours later at a hospital in Memphis. Officials said thermal injury<span style="color: Red;">*</span>killed her.
Since then, her story has drawn the attention of the national media and captivated millions.
Dec. 6, 2014, started off like a normal Saturday for Chambers. After hanging out with friends, she went to the store, came home and took a nap on the couch. After receiving a phone call, she left her house for what would be the last time.
Just after 8 p.m., Chambers was doused with gasoline and set on fire in her car next to the gate of some private land. She got out of the car and was found in the road with burns over most of her body. She was able to whisper a name to firefighters, but after interviewing more than 150 people, authorities still haven't been able to pin it to a specific person.
Her car was burned beyond recognition, with any useful evidence destroyed.
THE CLARION LEDGER
One year later: Jessica Chambers case far from cold


Tellis was living in Monroe with his new wife when he was arrested by Monroe Police Department and charged with crimes connected to the stabbing death of Meing-Chen Hsiao, 34, of Taiwan. Local media reports say she had been missing for more than a week when her body was found Aug. 8. She had been stabbed to death in her apartment.
Tellis has not been charged with her slaying, but according to jail records, he has been charged with three counts of unauthorized use of an access card and one count of possession of marijuana with intent to distribute.
The police report says Tellis allegedly used a Chase Bank debit card belonging to Hsiao on Aug. 7 at around 11 p.m. On that transaction, he charged $.07. On Aug. 18, it was allegedly used at 10:35 p.m. for $500 and again at 3:04 a.m. for another $500. Police said there were ATM surveillance photos of Tellis using the card, and he allegedly admitted to using the debit card on all three occasions.
A search warrant was served on his house and authorities found a quarter-pound of marijuana in a bedroom. The report says the drugs were packaged for sale.
According to Tellis' Facebook page, he married his fiancee on or around Aug. 8, the day Hsiao's body was found.
Tellis served<span style="color: Red;">*</span>time for residential burglary and fleeing law enforcement charges in Panola County.
0) { %> 0) { %>
0) { %>