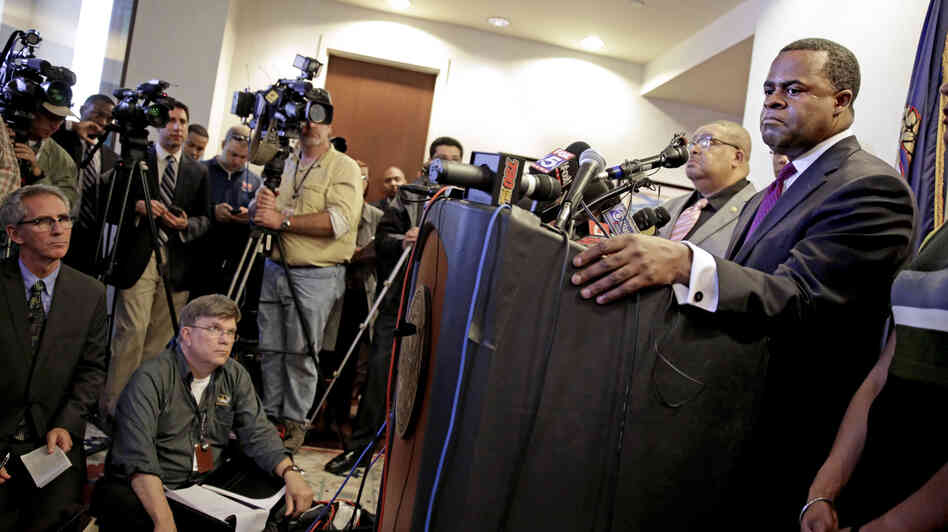 i i
hide captionAtlanta Mayor Kasim Reed announces that the city will demolish Turner Field after Major League Baseball's Atlanta Braves leave for a new stadium in the suburbs in 2017. Reed says it was a hard decision, but thinks the city will be better for it.

David Goldman/AP
Atlanta Mayor Kasim Reed announces that the city will demolish Turner Field after Major League Baseball's Atlanta Braves leave for a new stadium in the suburbs in 2017. Reed says it was a hard decision, but thinks the city will be better for it.
David Goldman/AP

$498 million — that's how much the state of Minnesota and the city of Minneapolis have agreed to pay as their share of a new nearly $1 billion football stadium for the Minnesota Vikings. Team owner Ziggy Wilf says he believes Minnesotans got a fair deal.
And as it turns out, the deal is pretty standard. But is it fair? Increasingly, privately owned sports teams aren't just asking for newer, fancier digs. They're also asking the public to pay half — or more — of the bill.
Hidden Costs Add Up
Judith Grant Long is a professor of Urban Planning at Harvard who has studied sports facility deals for over a decade. She tells All Things Considered host Audie Cornish that cities often end up paying far more than their fair share because of hidden costs from new roofs, police details, garbage pickup and a loss from property taxes (most sports facilities don't pay them).
She says those things add up and increase the average public share from 50 percent to 75 percent of a facility's total cost. And she's not alone in seeing through the perceived economic benefits from these deals.
Average capital cost of professional sports stadiums in use during 2010.

"The consensus amongst economists — and this outcome has really not changed much over the last 20 years — is that new sports facilities deliver very little in the way of new jobs and new taxes that are meaningful," she says.
Grant Long says that's in large part due to the "substitution effect." If someone decides to go to a Major League Baseball game, they are choosing not to do something else — like see a movie or go out to a restaurant.
Some sports teams have tried to sell deals with the promise of larger urban development and neighborhood revitalization. It can help smooth the public approval process, even if the promises don't pan out.
"It turns out to be a fairly convenient thing to package the sports facility in the context of this larger project," she says. "What we're seeing in the short-term is that these other kinds of developments simply haven't arrived yet."
So when — if ever — do these deals make financial sense for a city? Grant Long says it's not so bad when cities stick to providing land and infrastructure.
"I think it makes sense for a city to take on certain kinds of costs and to do them thoughtfully," she says. "And on a cost basis, on average, land and infrastructure comes up to about 25 percent of a total facility cost. So the idea [is] that cities would be aiming for a 25-75 split on the partnership."
Tough Decisions
Grant Long says one major reason elected officials agree to pay too much for a new stadium is that no one wants to be blamed for losing a beloved sports team. Just ask Atlanta Mayor Kasim Reed — both the baseball and football teams in his city were asking for help earlier this year. Reed struck a deal with the Falcons to help pay for a new football stadium. But he stunned baseball fans by saying no to the Braves, who wanted a costly upgrade to their ballpark.
Now the storied franchise of Hank Aaron is leaving Turner Field in downtown Atlanta for neighboring Cobb County.
To Reed, the deals were black and white. He says the Falcons arrangement is a "revenue generator" for the city and will be funded through a hotel-motel tax. Additionally, the city won't be on the hook for the debt of the $1.2 billion football stadium.
"The Braves have no revenue stream," he says. "The Braves needed somewhere between $150 million to $250 million in enhancements. ... And at the end of the day, we would've had to take on debt and the city of Atlanta's general fund would have had to backstop that debt."
Like Grant Long, Reed doesn't believe that stadiums are strong drivers of development. He says that hasn't happened around Turner Field, which was initially built for the 1996 Olympics and later retrofitted. In the end, the math just didn't add up for him.
"You know, I have to live in the world that I live in," he says. "And the fact of the matter is, I've got a city with a $900 million backlog for infrastructure — which is just a fancy word for roads, bridges, sidewalks, green spaces. And I think the people of Atlanta are more concerned with me investing $200 million ... [in infrastructure] than they are me investing $200 million in a retrofit for a multibillion-dollar company." 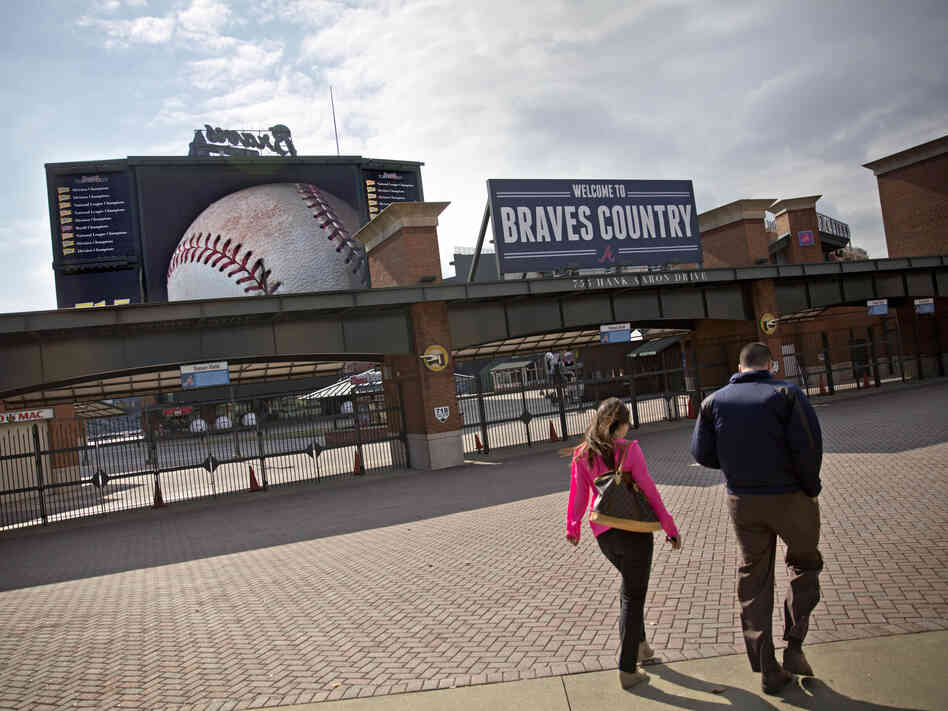 i i
hide captionEmployees enter Turner Field, the home of the Atlanta Braves baseball team.

Still, Reed says the decision was a "very emotional" one for him, and he's experienced some pushback from Braves fans.
"On the day that the team made the announcement, there was a great deal of anger and hurt from people who live in the city and people who live in the region because baseball is a game that respects and values tradition," he says.
But the Braves' owners made a business decision, which Reed says he respects. He offers an analogy.
"We had a terrific Ford that worked really well, we were prepared to keep our Ford running strong, and somebody drove up and offered the Braves a Range Rover and said, 'I'll pay 40 percent of it for you. I'll give you a brand new stadium, I'll let you control real estate development and I'll have the taxpayers pay 40 percent of the bill,'" he says.
He also sympathizes with other elected officials who are under pressure to sign off on big sports facility deals.
"I think municipalities do it because fans have a love of sports in the United States of America. And no leader of a city wants to be a leader that loses a major sports franchise," he says. "And I think all of those are drivers and I think that it gives our professional sports teams a great deal of leverage."
Grant Long, the Harvard University professor, analyzed her database and placed some of the 121 stadiums in use during 2010 into three price ranges based on their capital cost — and the public's share of the investment.
Here are her case studies from around the country: