33 [h=6]Share This Story![/h]Let friends in your social network know what you are reading about

[h=4]The Short List: Day 5 of N.Y. manhunt; Costas on Caitlyn; smaller carry-ons[/h]Out of the loop today? We've got what you missed.


Out of the loop today? We've got what you missed.(Photo: Seth Wenig, AP)


Lock your doors. Escaped prisoners are still missing
What does it take to track down a killer? That's the $100,000 question. The search for two men who escaped from the Clinton Correctional Facility in New York has entered a fifth day. Quick background — Richard Matt, 48, and David Sweat, 34, escaped Friday night or Saturday morning. Armed with cutting tools, and possibly torches, the pair broke through walls, crossed a catwalk and cut into a steam pipe, before crawling to the outside through a manhole. What we learned Wednesday about their escape — There was a possible accomplice. A female employee at the prison had "befriended" the inmates and may have helped them escape (reports say she's a prison seamstress). Status of the search — New York and Vermont police beefed up security along their border because they're concerned the two are trying to flee to a campground in the Vermont lake area to lay low. What to do if you live in the area — Lock your doors, and keep your eyes open. Marcel Centeno, with Track Down Services, a professional fugitive-recovery service, says the most likely way they'll be captured is with a good old-fashioned tip.


Nicholas Harris never had a relationship with his biological dad Richard Matt, one of the two inmates who escaped a New York state prison. Harris doesn't know much about the convicted killer, but he's sure of this: "I don't think he's coming here." VPC


Costas lauds Caitlyn Jenner's courage — but blasts Ashe Award as 'exploitation'
Count Bob Costas among those unimpressed with ESPN/ABC awarding Caitlyn Jenner the prestigious Arthur Ashe Courage Award. The NBC sportscaster was on The Dan Patrick Show this week when the topic of Jenner getting the award at next month's ESPY's came up. Costas, who is nothing if not thoughtful, eloquent and professional, didn't hold back: "It strikes me that awarding the Arthur Ashe Award to Caitlyn Jenner is just a crass exploitation play — it's a tabloid play. In the broad world of sports, I'm pretty sure they could've found someone — and this is not anything against Caitlyn Jenner — who was much closer actively involved in sports, who would've been deserving of what that award represents. That's not to say it doesn't take some measure of personal courage to do what Caitlyn Jenner has done."


A married prison seamstress is now at the center of reports surrounding the escape of two killers from a New York state prison. CNN reports the 51-year-old was supposed to drive the getaway car. VPC

Smaller carry-ons for flying? Our stuff won't fit in that!
Because we don't have enough baggage. The airline industry is proposing smaller carry-ons, which means millions of fliers could have to buy new luggage if the recommendation takes hold. The International Air Transport Association says its "optimal cabin bag size" plan would streamline restrictions that currently vary by airline and give "theoretically everyone" a chance to store their bags on the aircraft. IATA's recommendation would cap the size of cabin luggage at 21.5 inches tall by 13.5 inches wide by 7.5 inches deep. That's smaller than the maximum carry-on currently in place at many airlines, including the three biggest U.S. carriers — American, Delta and United — and way smaller than Southwest's much-roomier 24 by 16 by 10. The good news? Airlines are not obligated to adopt the carry-on standards. That remains up to each carrier. The better news? So far, no major U.S. carriers have indicated that they'll go along with the plan.


New guidelines proposed by the trade association that represents most of the world's airlines would limit the size of carry-on luggage to free up overhead bin space. VPC

Report backtracks on engineer's cellphone use during fatal crash
A more detailed analysis of cellphone records shows that an Amtrak engineer in the May 12 fatal derailment in Philadelphia wasn't using his cellphone around the time of the accident. The National Transportation Safety Board had said the engineer, Brandon Bostian, had been using his phone for calls, texts and data the day of the derailment, which killed eight passengers and injured 200. Amtrak's records confirm that the engineer didn't access the train's Wi-Fi system while he was operating the train, the safety board said. The train was going 106 mph into a curve — nearly twice the posted speed limit — at the time of the derailment. The cause of the accident is still under investigation.


The NTSB concluded that the enginer of the Amtrak train that crashed in Philadelphia was not using his phone at the time. USA TODAY reporter Bart Jensen talks with Shannon Rae Green about the finding. USA TODAY

Teen who survived bear attack: 'I just remember my scalp tearing'
Gabriel Alexander remembers being awakened from a deep sleep by intense pain in his scalp. "I had no idea what it was. I thought maybe it was a wild dog," Gabriel, 16, said. "I just remember my scalp tearing." The teenager from Athens, Ohio, was camping with his dad in Great Smoky Mountains National Park on Saturday when he was attacked while sleeping in a hammock. "I was afraid," he said. "I kind of thought, 'this is it.' I considered the idea that it might have killed my dad." The bear left deep gashes on Gabriel's scalp and face before his father, Greg Alexander, chased off the animal. Gabriel is now recovering at Mission Hospital in Asheville, N.C. 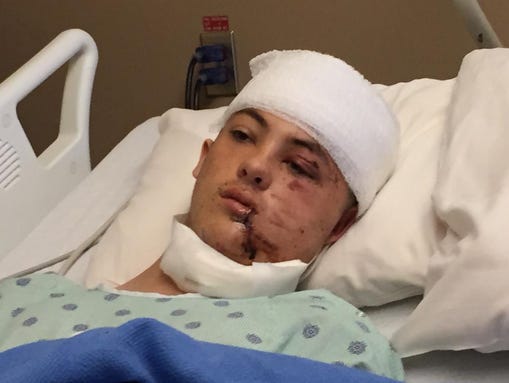 Gabriel Alexander, 16, talks about being attacked by a bear. The teen is recovering at Mission Hospital.<span style="color: Red;">*</span>(Photo: Sabian Warren/[email protected])

Too tired to read? Listen instead.
Extra Bites:

If you only read one thing tonight, read this: The Virgin/Branson perk that's got everyone talking.
Road trip! Want to hit every state in the union? Here's something fun in each of the 50 states.
'He protects me.' Audrey Stone talks about Figo, her 8-year-old service dog who saved her life when he leaped between the legally blind woman and an oncoming mini-school bus in Brewster, N.Y.


Lying in a hospital bed, Audrey Stone spoke softly about her companion of the past six years, Figo, the 8-year-old golden retriever who hurled his body between the legally blind woman and an oncoming mini-school bus in Brewster, New York. VPC

Epic high five. This moment between a crazy diver and a great white shark is touching. 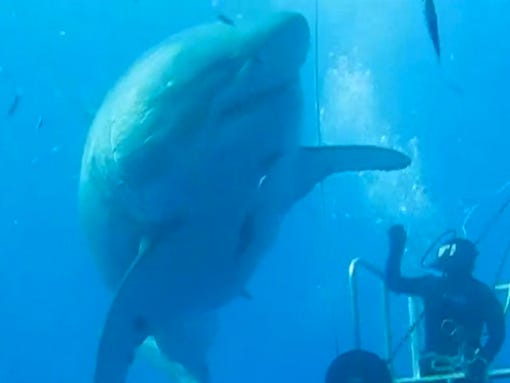 Mauricio Hoyos Padilla posted a video on Facebook showing a diver high-fiving a great white shark outside the cages in near Guadalupe Island in Mexico.<span style="color: Red;">*</span>(Photo: Screen shot via Facebook)

We all need a little distraction at some point during the day (what else are smartphones for?), so add DISTRACTME on the YO app. It'll be fun, we promise.
Want the Short List newsletter in your inbox every night? Sign up here.
This is a compilation of stories from across USA TODAY.
Contributing: Susan Miller, Bart Jansen, Doug Stanglin, Ben Mutzabaugh, USA TODAY; Chris Chase, USA TODAY Sports; Sarah Sekula, Special for USA TODAY; Sabian Warren, Asheville Citizen-Times
0) { %> 0) { %>
0) { %>