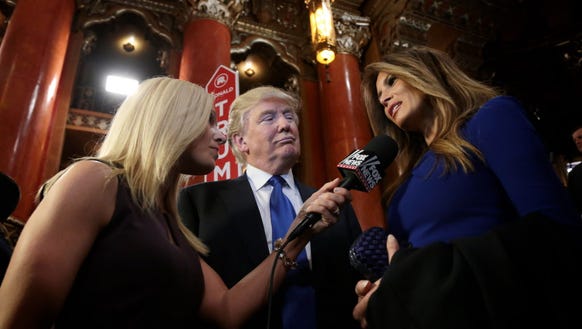 Donald Trump is taking his frustration with the media to the American people.
On Monday, the Republican nominee solicited his supporters to take a “Mainstream Media Accountability Survey” so he can “have my own poll that shows that the American people disagree with the dishonest media!”
The survey was sent out Monday morning to supporters in an email that began: “We’re not just fighting against Hillary Clinton … We are running against the very dishonest and totally biased media! It’s time to hold the media accountable for trying to rig this election against us.”
The 30-question survey solicits views of specific broadcast outlets and also focuses on Hillary Clinton and other campaign issues.
Here are some samples from the survey<span style="color: Red;">*</span>— answer options<span style="color: Red;">*</span>are “yes,” “no” or “no opinion":


"Hillary Clinton still gets a free pass from the media as she continues to lie about sending classified information on her secret server."
"Political correctness has created biased news coverage of both illegal immigration and radical Islamic terrorism."
"The RNC was right to drop CNBC as a partner after they failed to fairly moderate the October debate."
"The mainstream media played a critical role in electing President Obama and is now attempting to do it again for Hillary Clinton."
"More time is spent covering fake 'scandals' involving Trump than real scandals involving Hillary and our national security."
"If Donald Trump said or did half of the things Hillary Clinton has, the media would effectively end his candidacy."
"We should spend more time and resources holding the mainstream media accountable."
​
In his email, Trump said he wanted a poll of his own to tout the next time he was being interviewed.
"All too often I’m asked about a 'poll'<span style="color: Red;">*</span>put out by a liberal organization that says the American people disagree with our common-sense reforms to fix our country," Trump said in the email. "Well, Friend, with your help today, the next time I’m being interviewed, I will have my own poll that shows that the American people disagree with the dishonest media!"
It is not clear how the results of the survey will be tallied (the poll only requires<span style="color: Red;">*</span>name, ZIP code and email before submitting), and a spokesman from the Trump campaign did not immediately respond to request for more information.
Trump has made attacks on media a pillar of his strategy from the beginning (though he has also used the media and its free coverage to his advantage).<span style="color: Red;">*</span>But his frustration with the press has reached new heights as a series of reports of his struggling campaign have been published in recent days.
On Saturday,<span style="color: Red;">*</span>The New York Times ran an article titled “Inside the Failing Mission to tame Donald Trump’s Tongue,” and the businessman spent much of the weekend railing against the outlet<span style="color: Red;">*</span>and the media in general.

It is not "freedom of the press" when newspapers and others are allowed to say and write whatever they want even if it is completely false!
— Donald J. Trump (@realDonaldTrump) August 14, 2016​

On Fox & Friends on Monday, former New York mayor Rudy Giuliani, who acts as a surrogate for Trump, defended the attacks on the media.
“The reality is he is determined to win and his effort against the press is not for him; his effort against the press is fighting for the American people," Giuliani<span style="color: Red;">*</span>said. "He is saying the American people are not getting the facts they’re entitled to; they’re not getting both sides of the story," Giuliani added in reference to The New York Times report.
[h=4]Posted![/h]A link has been posted to your Facebook feed.