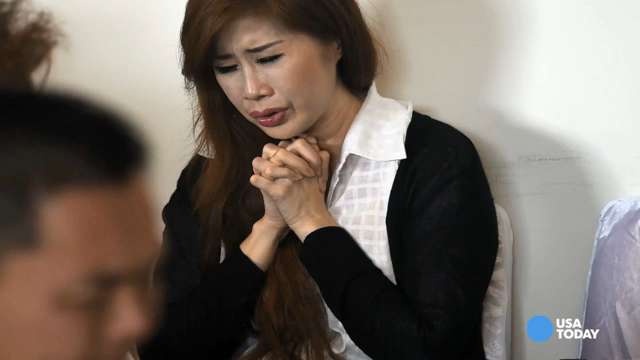 The head of the search for the missing AirAsia Flight 8501 said there is little doubt the jet met a grim end. There is hope that the jet will be found, unlike Malaysia Airlines Flight 370, which remains missing after nine months. VPC

Family members of passengers on board the missing AirAsia Flight 8501 attend a briefing at Juanda International Airport in Surabaya on Dec. 29.(Photo: Manan Vatsyayana, AFP/Getty Images)


SURABAYA, Indonesia — Helicopters began searching land Tuesday for possible wreckage from AirAsia Flight 8501, three days after the jet with 162 people aboard vanished in stormy weather over the Java Sea.
More aircraft and ships, including a U.S. destroyer, were joining the hunt, which has focused on a 70-square-nautical-mile area between Belitung island, off Sumatra, and Borneo island. The water in the busy shipping lane is relatively shallow, about 150 feet deep.
Four Indonesian military helicopters headed out after first light to scour western Borneo and two smaller islands, Belitung and Bangka.
Oily spots and objects seen in the sea by air crews were ruled out as being connected to the jet's disappearance Sunday morning, about an hour into the two-hour flight to Singapore.
Responding to a request for help from the Indonesian government, the destroyer USS Sampson will join the search later Tuesday, the U.S. Navy announced. The warship has been deployed in the western Pacific. 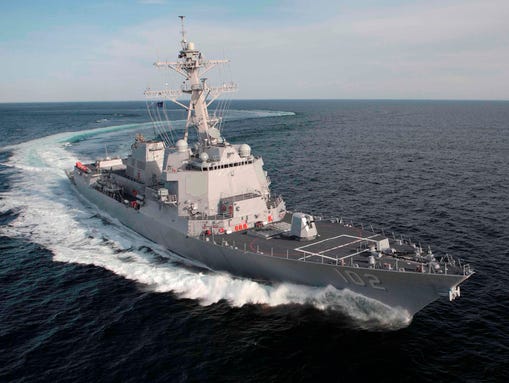 This April 2007 photo released by the U.S. Navy shows the guided missile destroyer USS Sampson during a test cruise off the coast of Maine.(Photo: AP/U.S. NAVY)

At a news briefing at Surabaya's Juanda International Airport on Monday, officials held out hope for survivors but said they were preparing for the worst.
Indonesian Vice President Jusuf Kalla said the search operation, which involves 30 ships and 50 aircraft, could still be characterized as a rescue mission.
"There is no time limit on the operation," he said. "Of course, we hope there will be survivors and pray for that. But we realize that the worst may have happened."
The Airbus A320, which took off from Surabaya, lost contact with air-traffic control around 7:24 a.m. Singapore time Sunday (6:24 p.m. ET Saturday), the airline said. The pilots had asked for permission to climb to avoid storm clouds, but six other aircraft were in the vicinity, so controllers temporarily denied their request. Minutes later, the plane vanished from radar screens without declaring an emergency.
Late Monday, Trikora Harjo, general manager of Juanda airport, told USA TODAY that the results of the search were "nil." He said Indonesia's National Search and Rescue Agency had ruled out the oil slicks and objects spotted in the Java Sea. The agency dismissed reports of a faint flight-recorder ping.
First Adm. Sigit Setiayana, the Naval Aviation Center commander at the Surabaya air force base, said 12 navy ships, five planes, three helicopters and a number of warships are taking part in the search, along with ships and planes from Singapore and Malaysia. The Australian air force sent a search plane.
Vice President Kalla had confirmed that objects were spotted by an Australian Orion plane but said it was "not yet clear" what they were. Air force spokesman Rear Marshal Hadi Tjahnanto told MetroTV that an Indonesian helicopter in the eastern part of Belitung spotted two oily spots about 105 nautical miles east of Tanjung Pandan. He said oil samples would be collected and analyzed to see whether they are connected to the missing jet.
At a news conference earlier Monday, Indonesian National Search and Rescue chief Henry Bambang Soelistyo said, "Based on the coordinates that we know, the evaluation would be that any estimated crash position is in the sea and that the hypothesis is the plane is at the bottom of the sea."
Tony Fernandes, CEO of the low-cost regional carrier AirAsia, said it was too early to discuss any operational changes his airline would undergo in light of the missing flight. "Until we have a full investigation and know what went wrong, we really can't speculate," he said. He said the airline has carried 220 million passengers safely up to this point.
USA TODAY
AirAsia Flight 8501: What we know

As evening began to fall on the second day of the search, dozens of family members of passengers on the jet remained in limbo at a temporary crisis center set up in Juanda International Airport.
Some wept while others wore expressions ranging from shock to frustration to grim resolve as officials briefed them on the latest updates of the search operations.
Ria Ratna Suri said his sister, her husband and his cousin were aboard the missing flight. His sister owns a small shop in their hometown of Madiun, about 100 miles inland from Surabaya. "They were going to Singapore for a trip," he said. "They were going to spend the new year there. I still hope everything is OK."
Kenny Tanggu's 27-year-old cousin and his wife were on their way to Singapore to enjoy the New Year's holiday. "I don't know what to think," Tanggu said. "I just want to know where (the jet) is."
The tragedy is the third commercial air disaster involving airlines in the region this year. Mystery still shrouds Malaysia Airlines Flight 370, which disappeared March 8 without a trace en route from Kuala Lumpur to Beijing with 239 people aboard. On July 17, another Malaysia Airlines craft was shot down over rebel-controlled eastern Ukraine while on a flight from Amsterdam to Kuala Lumpur, killing all 298 people on board.
Djoko Murjatmodjo, Indonesia's acting director general of transportation, said that minutes before the AirAsia flight disappeared from radar, the pilot asked air-traffic control for permission to avoid a cloud bank by turning left and going higher, to 34,000 feet. Six other commercial airliners crowded the surrounding airspace, forcing the jet to remain at a lower altitude, the Associated Press reported. Flight 8501 gave no distress signal, Murjatmodjo said.
AccuWeather meteorologist Tyler Roys told USA TODAY the area along the flight path was blasted by a string of severe thunderstorms when the jet disappeared.
AirAsia said in a written statement that the jet had seven crewmembers and 155 passengers, including 16 children and one infant. Among the passengers were 149 Indonesians and three South Koreans, one Malaysian, a Briton and his 2-year-old Singaporean daughter.
Murjatmodjo said the jet is believed to have gone missing somewhere over the Java Sea between Tanjung Pandan on Belitung Island and Pontianak, on Indonesia's part of Borneo island. Contact was lost about 42 minutes after takeoff from Surabaya airport.
USA TODAY
Theories — what might have happened to AirAsia plane?

Financial services company Allianz said its subsidiary Allianz Global Corporate & Specialty UK is the lead insurance firm for the missing aircraft. The German-based firm issued a statement saying it is too early to comment on the incident but expressing support for those affected by it.
AirAsia, which has dominated cheap travel in the region for years, had never lost an aircraft. Flight 8501 was operated by AirAsia Indonesia, a subsidiary that is 49% owned by AirAsia Malaysia. AirAsia officials changed the airline's Facebook and Twitter account logos from red to gray after the jet disappeared.
The jet's captain, identified in flight documents as Capt. Iriyanto, had 20,000 flying hours, including 6,100 in the Airbus. The first officer had a total of 2,275 flying hours, said AirAsia, based in Sepang, Malaysia, near Kuala Lumpur.
Contributing: Bart Jansen, John Bacon, Michael Winter, USA TODAY; the Associated Press