A USA TODAY NETWORK investigation has found hundreds of cases in which Donald Trump and his businesses are accused of failing to pay people for their work. USA TODAY

Paul Friel was working for his father's company when he says a dispute with one of Donald Trump's companies in Atlantic City caused his company to be blacklisted.(Photo: Craig Bailey, FLORIDA TODAY)


During the Atlantic City casino boom in the 1980s, Philadelphia cabinet-builder Edward Friel Jr. landed a $400,000 contract to build the bases for slot machines, registration desks, bars and other cabinets at Harrah's at Trump Plaza.
The family cabinetry business, founded in the 1940s by Edward’s father, finished its work in 1984 and submitted its final bill to the general contractor for the Trump Organization, the resort’s builder.
Edward’s son, Paul, who was the firm’s accountant, still remembers the amount of that bill more than 30 years later: $83,600. The reason: the money never came.<span style="color: Red;">*</span>“That began the demise of the Edward J. Friel Company… which has been around since my grandfather,” he said.
Donald Trump often portrays himself as a savior of the working class who will "protect your job." But a<span style="color: Red;">*</span>USA TODAY NETWORK analysis found he has been involved in more than 3,500 lawsuits over the past three decades — and<span style="color: Red;">*</span>a large number of<span style="color: Red;">*</span>those involve ordinary Americans, like the Friels, who say Trump or his companies have refused to pay them.
At least 60 lawsuits, along with hundreds of liens, judgments, and other government filings reviewed by the USA TODAY NETWORK, document people who have accused Trump and his businesses of failing to pay them for their work. Among them: a dishwasher in Florida. A glass company in New Jersey.<span style="color: Red;">*</span>A carpet company. A plumber. Painters. Forty-eight waiters. Dozens of bartenders and other hourly workers at his resorts and clubs, coast to coast. Real estate brokers who sold his properties. And, ironically, several law firms that once represented him in these suits and others.
Trump’s companies have also been cited for 24 violations of the Fair Labor Standards Act since 2005 for failing to pay overtime or minimum wage, according to U.S. Department of Labor data. That includes 21 citations against the defunct Trump Plaza in Atlantic City and three against the also out-of-business Trump Mortgage LLC in New York.<span style="color: Red;">*</span>Both cases were resolved by<span style="color: Red;">*</span>the companies agreeing to pay back wages.
USA TODAY
Exclusive: Trump's 3,500 lawsuits unprecedented for a presidential nominee 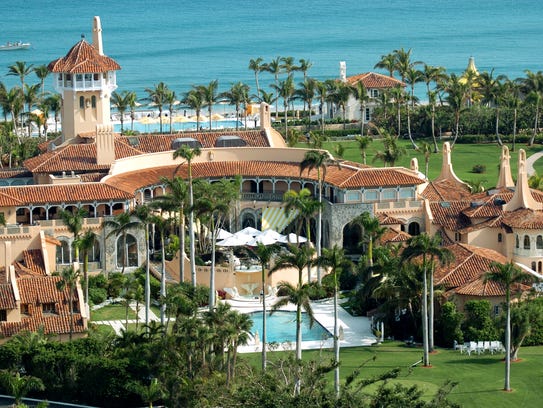 Mar-a-Lago LLC agreed to pay Dorcinvil $7,500 to settle the case in 2008. The terms of the settlement agreement includes a standard statement that Mar-a-Lago does not admit fault and forbids Dorcinvil or his lawyers from talking about the case, according to court records.
Developers with histories of not paying contractors are a very small minority of the industry, said Colette Nelson, chief advocacy officer of the American Subcontractors Association. But late or missing payments can be devastating for small businesses and their employees.
“Real estate is a tough and aggressive business, but most business people don’t set out to make their money by breaking the companies that they do business with,” she said, stressing she couldn’t speak directly to the specifics of cases in Trump’s record. “But there are a few.”
In the interview, Trump said<span style="color: Red;">*</span>that complaints represent a tiny fraction of his business empire and dealings with contractors and employees, insisting all are paid fairly.<span style="color: Red;">*</span>“We pay everybody what they’re supposed to be paid, and we pay everybody on time,” he said. “And we employ thousands and thousands of people. OK?”
[h=2]The slot-machine cabinets[/h] 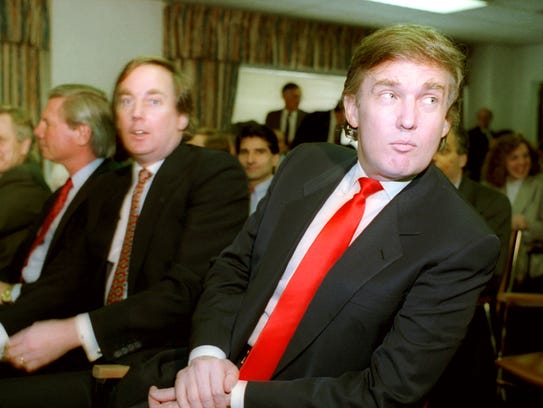 Donald Trump, right, waits with his brother Robert for the start of a Casino Control Commission meeting in Atlantic City on March 29, 1990. Trump was seeking final approval for the Taj Mahal Casino Resort, one of the world's largest casino complexes.<span style="color: Red;">*</span>(Photo: AP) 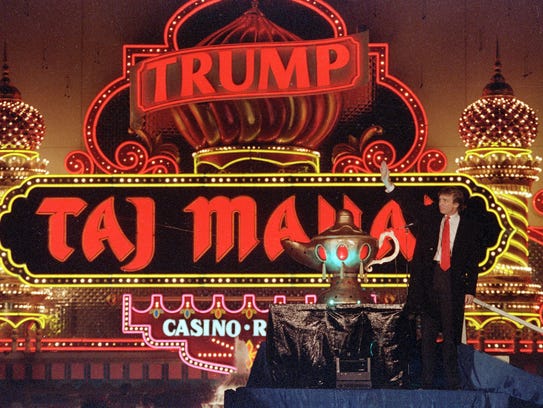 Donald Trump stands next to a genie lamp as the lights of his Trump Taj Mahal Casino Resort light up the evening sky marking the grand opening of the venture in Atlantic City on April 5, 1990.<span style="color: Red;">*</span>(Photo: Mike Derer, AP)

A half-decade after the Friels’ encounter, in 1990, as Trump neared the opening of his third Atlantic City casino, he was once again attempting to pay contractors less than he owed. In casino<span style="color: Red;">*</span>commission records of an audit, it was revealed that Trump’s companies owed a total of $69.5 million to 253 subcontractors on the Taj Mahal project. Some already had sued Trump, the state audit said; others were negotiating with Trump to try to recover what they could. The companies and their hundreds of workers had installed walls, chandeliers, plumbing, lighting and even the casino’s trademark minarets.
One of the builders was Marty Rosenberg, vice president of Atlantic Plate Glass Co., who said he was owed about $1.5 million for work at the Taj Mahal. When it became clear Trump was not going to pay in full, Rosenberg took on an informal leadership role, representing about 100 to 150 contractors in negotiations with Trump.
Rosenberg’s mission: with Trump offering as little as 30 cents on the dollar to some of the contractors, Rosenberg wanted to get as much as he could for the small businesses, most staffed by younger tradesmen with modest incomes and often families to support.
“Yes, there were a lot of other companies," he said of those Trump left waiting to get paid. "Yes, some did not survive."
Rosenberg said his company was among the lucky ones. He had to delay paying his own suppliers to the project. The negotiations led to him eventually getting about 70 cents on the dollar for his work, and he was able to pay all of his suppliers in full.
[h=2]Unpaid based on 'whimsy'[/h]The analysis of Trump lawsuits<span style="color: Red;">*</span>also found that professionals, such as real estate agents and lawyers, say he's refused<span style="color: Red;">*</span>to pay them sizable sums of money.<span style="color: Red;">*</span>Those cases<span style="color: Red;">*</span>show that even some loyal employees, those selling his properties and fighting for him in court, are only with him<span style="color: Red;">*</span>until they’re not.
Real estate broker Rana Williams, who said she had sold hundreds of millions of dollars in Manhattan property for Trump International Realty over more than two decades with the company, sued in 2013 alleging Trump shorted her $735,212 in commissions on deals she brokered from 2009 to 2012. Williams, who managed as many as 16 other sales agents for Trump, said the tycoon and his senior deputies decided to pay her less than her contracted commission rate “based on nothing more than whimsy.”
Trump and Williams settled their case in 2015, and the terms of the deal are confidential, as is the case in dozens of other settlements between plaintiffs and Trump companies.
However, Williams' 2014 deposition in the case is not sealed. In her sworn testimony, Williams said the 2013 commission shortage wasn't the only one, and neither was she the only person who didn't get fully paid. “There were instances where a sizable commission would come in and we would be waiting for payment and it wouldn’t come,” she testified. “That was both for myself and for some of the agents.”
Another broker, Jennifer McGovern, filed a similar lawsuit against the now-defunct Trump Mortgage LLC in 2007, citing a six-figure commission on real-estate sales that she said went unpaid. A judge issued a judgment ordering Trump Mortgage to pay McGovern $298,274.
[h=2]Turning the tables on lawyers[/h]Even Trump’s own attorneys, on several occasions, sued him over claims of unpaid bills.
One law firm that fought contractors over payments and other issues for Trump — New York City’s Morrison Cohen LLP — ended up on the other side of a similar battle with the mogul in 2008. Trump didn’t like that its lawyers were using his name in press releases touting its representation of Trump in a lawsuit against a construction contractor that Trump claimed overcharged him for work on a luxury golf club.
As Trump now turned his ire on his former lawyers, however, Morrison Cohen counter-sued. In court records, the law firm alleged Trump didn’t pay nearly a half million dollars in legal fees. Trump and his ex-lawyers settled their disputes out of court, confidentially, in 2009.
In 2012, Virginia-based law firm Cook, Heyward, Lee, Hopper & Feehan filed a lawsuit against the Trump Organization for $94,511 for legal fees and costs. The case was eventually settled out of court. But as the case unfolded, court records detail how Trump's senior deputies attacked the attorneys' quality of work in the local and trade press, leading the firm to make claims of defamation that a judge ultimately rejected on free speech grounds.
[h=2]'Tons<span style="color: Red;">*</span>of these stories out there'[/h]Trump claims in his presidential personal financial disclosure to be worth $10 billion as a result of his business acumen.<span style="color: Red;">*</span>Many of the small contractors and individuals who weren’t paid by him haven’t been as fortunate. 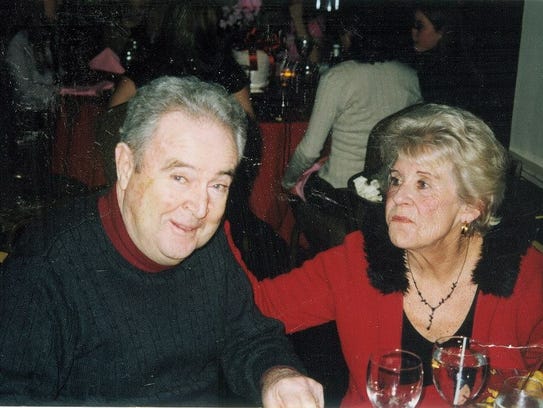 Edward Friel, left, and his wife, owned a family cabinetry business that says it was badly harmed by non-payment on a big contract at one of Donald Trump's Atlantic City casinos.<span style="color: Red;">*</span>(Photo: Photo courtesy of Friel family)

Edward Friel, of the Philadelphia cabinetry company allegedly shortchanged for the casino work, hired a lawyer to sue for the money, said his son, Paul Friel.<span style="color: Red;">*</span>But the attorney advised him that the Trumps would drag the case out in court and legal fees would exceed what they’d recover.
The unpaid bill took a huge chunk out of the bottom line of the company that Edward ran to take care of his wife and five kids. “The worst part wasn’t dealing with the Trumps,” Paul Friel said. After standing up to Trump, Friel said the family struggled to get other casino work in Atlantic City.<span style="color: Red;">*</span>“There’s tons of these stories out there,” he said.
The Edward J. Friel Co. filed for bankruptcy on Oct. 5, 1989.
Says the founder's grandson: “Trump hits everybody.”
Contributing: John Kelly, Nick Penzenstadler, Karen Yi, David McKay Wilson