A car burns after violence erupted during a standoff between police and an angry crowd near N. 44th St. and W. Auer Ave.(Photo: Calvin Mattheis / Milwaukee Journal Sentinel) 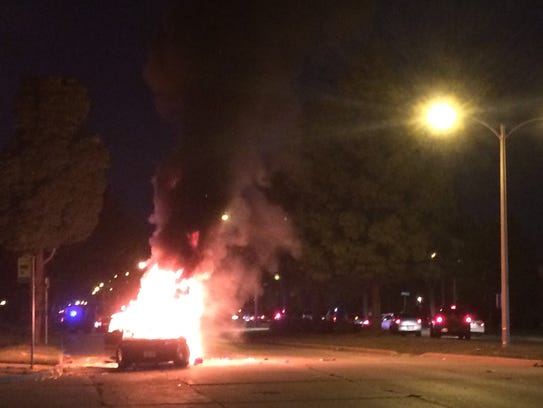 A standoff between police and an angry crowd turned violent Saturday night in the hours after a Milwaukee police officer shot and killed an armed suspect during a foot chase on the city's north side.<span style="color: Red;">*</span>(Photo: Calvin Mattheis / Milwaukee Journal Sentinel)

"If you love your son, if you love your<span style="color: Red;">*</span>daughter, text them, call them, pull them by their ears," he added. "Get them home."
Police had "shown an amazing amount of restraint," Barrett said. Some at the scene took to social media earlier Saturday night to encourage others, many of them young people, to come out and participate in what the mayor described as trouble-making. He urged parents to keep tight reins on their children to avoid a repeat of Saturday night.
Hamilton said, "Our city is in turmoil tonight."<span style="color: Red;">*</span> He promised a full and open investigation into the<span style="color: Red;">*</span>police-involved shooting.
"When we get information, we are going to share it with the public, please allow the process to work," he said.
[h=2]Turmoil erupts[/h]Assistant Police Chief James Harpole said at least 200 people<span style="color: Red;">*</span>had gathered at the uprising. He said there were multiple gunshots over the course of the evening.
When the gas station was set ablaze, there were three people in the building and all got out safely, he said.
At times, those gathered pushed against a line of 20 to 30 officers, some of whom wore riot gear. Officers got in their cars to leave at one point, and some in the crowd started smashing the windows of a squad car and another vehicle, which was set on fire. As officers returned to the scene, this time many more in riot gear, gunshots could be heard about 8:45 p.m
The shots appeared to be fired in the air by someone in the crowd.
USA TODAY
Justice Department: Baltimore police regularly violated constitutional rights


Soon after, the crowd turned on and chased<span style="color: Red;">*</span>reporters and a photographer from the Journal Sentinel. One reporter was shoved to the ground and punched.
Police later tweeted that an officer was hit in the head with a brick that was thrown through a squad car window. Police said the officer was being treated at a hospital.
The violence erupted not long after a woman who identified herself as a family member of the dead man implored the people to leave the scene.
"We don't want anyone else to go to jail or get hurt," she told the crowd.
Some left but many stayed as tensions built. Around 12:30 a.m. CT, Barrett said the north side of the city was starting to calm down.
[h=2]A footchase, then gunshots[/h]The shooting occurred Saturday afternoon.
City police officials said two officers stopped two suspects in a car at about 3:30 p.m. The suspects then took off on foot. During the pursuit, a six-year veteran of the department shot and killed a 23-year-old Milwaukee resident, who was carrying a semiautomatic handgun, police said.
The officer was not hurt.
Shortly after the shooting, Milwaukee Police Assistant Chief Bill Jessup said at the scene that it wasn't immediately clear whether the suspect pointed the gun or shot at the officer.
"Those additional facts will come out in the coming days," Jessup said.
City police officials have not interviewed the officer, Jessup said. That responsibility will fall to the Wisconsin Department of Criminal Investigation, which is required by state law to take over officer-involved shooting investigations.
"That officer had to make a split-second decision when the person confronted him with a handgun," Jessup said. "This is a risk they take every day on behalf of our community."
Jessup said he didn't immediately know why the officers stopped the suspects.
xEmbed

The scene near 44th St. and Auer Ave in Milwaukee after more than 100 people gathered following an officer-involved shooting. Ashley Luthern

Police said the suspect had a "lengthy arrest record," though the specific crimes were not detailed. The suspect was carrying a handgun taken in a March burglary in Waukesha. The owner reported that 500 rounds of ammunition also were stolen.
The officer is 24 and will be placed on administrative duty during the investigation and subsequent review by the district attorney's office.
The second suspect who fled on foot, also a 23-year-old man, was apprehended and is in custody, Jessup said.
[h=2]Police shooting tops off violent weekend[/h]The shooting occurred about one block northwest of the scene of a Friday evening homicide, and about four blocks west of a Saturday morning double homicide. Five people died in shooting-related homicides during a nine-hour stretch in the city on Friday night and Saturday morning.
"As everyone knows, this was a very, very violent 24 hours in the city of Milwaukee," Jessup said. "Our officers are out here taking risks on behalf of the community and making split-second decisions."
Nefataria Gordon said she knew the man who had been killed by the officer. "He was a nice good person. He was really respected. That's why everyone came out. They're angry."
The clash comes after a series of tense episodes in Milwaukee involving residents and police, including one just before the Fourth of July weekend near Sherman Park.
In early July, a group of several dozen young people threw rocks and bottles, damaging windows of a gas station and a county transit bus near Sherman Park. Law enforcement beefed up their presence for<span style="color: Red;">*</span>several days there. Some<span style="color: Red;">*</span>activists said it was an intimidating presence. At the same time,<span style="color: Red;">*</span>the incidents also led to a surge in residents and local leaders promoting positive activity there.