A handwritten note at the home of the Virginia Beach shootings suspect expressed condolences to the victims on behalf of the suspect’s family.

The suspect died in a shootout with police. The note was taped to the front door of the two-story house on the wooded road where he lived, about an hour from the city.

It said: “The family of DeWayne Craddock wishes to send our heart felt condolences to the victims. We are grieving the loss of our loved one.” It said the family wanted to focus on the victims of the shootings and offered thoughts and prayers for the relatives of the dead and wounded.

Eleven city employees and a contractor were killed in the Friday afternoon shooting at a municipal building. Four were engineers who worked to maintain streets and protect wetlands. Three were right-of-way agents who reviewed property lines. The others were an account clerk, a technician, an administrative assistant and a special projects coordinator. In all, they had served the city of Virginia Beach for more than 150 years.

“They leave a void that we will never be able to fill,” said city manager Dave Hansen.

Police chief James Cervera said the gunman had been an engineer with the city’s utilities department for 15 years. He declined to comment on a motive although in response to a reporter’s question, he said the gunman had not been terminated. City officials uttered his name just once and said they would not mention it again.

One of the dead employees had worked for the city for 41 years. Six worked in the same department as the suspect. The victims were found throughout the building, on three floors, police said. The building was open to the public but security passes were required to enter inner offices, conference rooms and other work areas. As a current employee, the suspect had a pass. 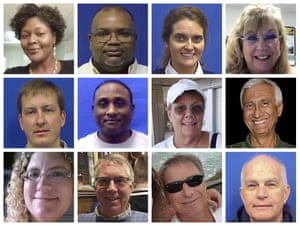 One of the dead, Christopher Kelly Rapp of Powhatan, enjoyed Scottish music and joined a pipe band last fall. He played with the group in October during a Celtic festival in Virginia and marched with bandmates on St Patrick’s Day.

“Chris was reserved but very friendly, quietly engaging members one-on-one after our weekly practices,” the band, Tidewater Pipes & Drums, said in a statement.

Another victim, Mary Louise Gayle of Virginia Beach, was described as a “super sweet lady” who always had a big smile. “She would always be out there in the yard, working on something and talking to my daughters,” John Cushman, Gayle’s next-door neighbor, told the New York Times.

The other employees who were killed were Tara Welch Gallagher, Alexander Mikhail Gusev, Katherine A Nixon, Ryan Keith Cox, Joshua O Hardy and Michelle “Missy” Langer, all of Virginia Beach; Laquita C Brown and Robert “Bobby” Williams, both of Chesapeake; and Richard H Nettleton of Norfolk. The 12th victim, Herbert “Bert” Snelling of Virginia Beach, was a contractor who was in the building to seek a permit.

The police and fire departments were to assign members of their honor guards to help each victim’s family.

Hundreds of people attended Saturday prayer vigils for the dead.