In Virginia Beach on Monday, signs of a shooting that killed 12 people on Friday could still be seen at a complex of government buildings as authorities search for a motive.

At one entrance to the municipal center, a makeshift memorial was made up of bouquets, flags, teddy bears and crosses bearing the names of the dead. A small group of city employees cried and hugged each other as they left flowers by one of the crosses. Volunteers with comfort dogs were on hand.

A section of the compound was still blocked off by law enforcement vehicles and FBI personnel could be seen walking around.

On Sunday night, hundreds gathered to remember the dead. City and state officials were among the mourners at Piney Grove Baptist church.

Rabbi Israel Zoberman of Virginia Beach was among the speakers. A son of Holocaust survivors who escaped Poland in the second world war, he said the city had “lost its beautiful but also blinding innocence”.

The vigil closed with the lighting of 12 candles alongside a framed photograph of each victim. A woman read each name aloud as she lit the candles.

Four people were severely wounded in the shooting.

Police have sought not to add to speculation over why the 40-year-old gunman, DeWayne Craddock, acted as he did. Police have not announced that he left any note, internet message or manifesto. Police said he had no specific target, shooting indiscriminately, including a first victim in a vehicle in the parking lot.

He was shot and fatally wounded by police after a gun battle in the halls of the 1970s-era municipal building, having at one time shot through a closed door and wall.

Virginia Beach’s police chief, James Cervera, described the gunman as “disgruntled” but declined to say more about what may have precipitated the attack. 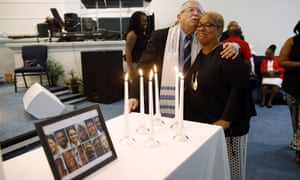 The gunman was employed by the city as an engineer. He declared his intention to quit by email in the morning and started shooting at his workplace of almost 15 years that afternoon, about 4pm. His bosses said he was an employee in good standing with no disciplinary actions pending and was not going to be fired.

“To the extent that the subject’s employment status has anything do with these events, that will be part of the ongoing investigation,” the Virginia Beach city manager, Dave Hansen, told reporters.

On Monday the city communications director, Julie Hill, said the email was brief, unremarkable and did not contain anything that foreshadowed what happened next. The resignation letter, Hill added, is now part of the investigative file and must be cleared by detectives for public release.

The gunman’s parents posted a handwritten note on the front door of their home in Yorktown, Virginia, expressing sorrow and prayers for the victims.

The shooting was the deadliest instance of US gun violence since November, when a dozen people were killed at a Los Angeles-area bar and grill by a gunman who killed himself.

The Virginia Pilot reported that Greg Zanis, from a group called Crosses for Losses, drove to Virginia Beach from Chicago to deliver a dozen white wooden crosses, one each for the victims.

In February, Zanis delivered five crosses to a workplace in his hometown, Aurora, Illinois, after a shooting there.